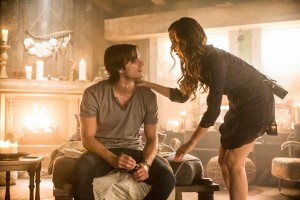 While the other members of her family were okay with the king returning from Asgard, with Ingrid and Freya not having the memories of the ruthless way in which he ruled to define their opinions of him, Joanna knew that she had to do something to send him back. There was no way that the two of them were going to be able to co-exist within the same plane of existence, which made her decide to use the time door in order to procure the weapon necessary to rid herself of him once and for all. It’s a risky move, though, because he knows more than he lets on about her tactics and Joanna could find herself stuck in the past – or something worse.

On the season finale of Witches of East End, Joanna tries to find a way to escape the past, though she gets delayed when she runs into Tarkoff. Not only does he have the weapon that she needs to defeat the king, there’s a high likelihood that he’ll attempt to keep her in Baltimore for as long as possible so that she goes past the allotted 12 hours she can stay in the past. By keeping the weapon away from her, Tarkoff is running out the clock on the Beauchamp matriarch and hoping to get her out of the way so the king can focus on bringing Ingrid, Freya, and Frederick back to Asgard unimpeded. However, with Ingrid knowingly deceiving the king with talk of her allegiance, Tarkoff might not be able to deliver the grandchildren even if he does manage to take out Joanna, especially if Freya is forced to simultaneously grieve the loss of her mother and her lover.

Elsewhere on Witches of East End, Frederick becomes suspicious of Ingrid’s intentions in returning to Asgard, while Ingrid receives shocking news from King Nikolaus, Dash’s dark secret gets closer to the light, and Killian’s rash decision has major reverberations.

The two-hour second season finale of Witches of East End airs Sunday at 9:00 on Lifetime.

Do you think Joanna, Wendy, and Freya will be able to escape the past before the 12 hours pass? What could Ingrid learn from the king that would be so shocking? How will Dash handle his dark secret being exposed to the East End populace?