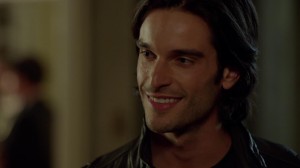 Freya and Killian might have lifetimes of romance between them, but each of those lifetimes ended in tragedy, as the star-crossed lovers have never been able to have a relationship that lasts. No matter how hard they try, no matter how cognizant they might be of it, they simply can’t go against the fates that keep pushing them apart, fates that helped bring Tarkoff to East End and put him in the position to end Freya’s life. But even after centuries of heartbreak, death, and destruction, is it possible for Killian to break the cycle that he and Freya are trapped in?

On the next episode of Witches of East End, Killian learns of a spell that could halt the patterns that keep he and Freya crashing into one another and leaving the other utterly destroyed. The only catch? According to the witch doctor, he’ll have to give up his own life in order to ensure that the next lifetime he shares with Freya is one without a curse lingering over their heads. Killian isn’t exactly in the right state of mind to hear something like this and it could all be for naught if he goes through with it, as Freya’s grandfather has already brought her back from the brink of the underworld; should Killian agree to the spell and give up his life in hopes of seeing Freya again, he will only be continuing the patterns that have kept the two apart for so long and furthering the curse that has negatively impacted each of his former lifetimes. Will Killian give himself time to think about going through with the spell, time where he could learn that Freya’s alive? Or is his grief for Freya so strong that he’ll want to do the spell then and there, thereby shifting the heartache he’s been suffering from to the one he wanted to protect?

Elsewhere on Witches of East End, Ingrid begins considering returning to Asgard after bonding with her grandfather, while Joanna explores one of her past lives with Freya and Wendy and Dash learns the true identity of the woman he slept with.

Witches of East End airs Sundays at 9:00 on Lifetime. You can check out a preview of the next episode here.

Do you think Killian will be able to break the cycle of heartbreak he and Freya are trapped in? Should Ingrid return to Asgard with her grandfather? What could Joanna be looking for in her past life?