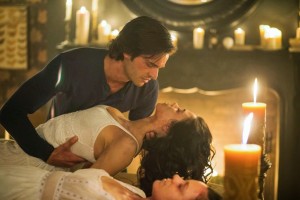 When Killian discovered that Freya had died, he immediately gave up on the rest of his own life. He couldn’t imagine going on without having her by his side and with the discord between him and Dash, Killian had no ties keeping him to East End or this existence. That sadness in losing someone he was so closely connected with forced him into the botanica where he wound up acquiring a poison that will kill him yet guarantee that the next lifetime he lives will reunite him with Freya. And this time, they won’t have to worry about being star-crossed, as the poison was supposed to scrape the curse off of their souls and allow them to be happy for more than just a moment.

On the second season finale of Witches of East End, Killian lingers between the world of the living and the world of the dead, a lonely area of existence where he finds Freya, who tells him that she’s alive and that when he wakes up, he is to contact Ingrid. Now that he knows that Freya is alive, Killian must find a way to counteract the poison so that he and his lover can try to make things work in this lifetime rather than waiting for the next. Not only will Ingrid be the best bet for assisting him in reversing the effects of the poison, given that she’s arguably the strongest witch in the Beauchamp family bar Joanna, reaching out to her based on a visit from Freya could clue her in on the dangers facing her sister, her mother, and her aunt. As a result, Ingrid might end up having to save Freya, Wendy, and Joanna from the dangers of the past while protecting the futures of Killian and Killian’s relationship with Freya. But what happens if there’s nothing she can do to reverse the poison Killian ingested?

Elsewhere on Witches of East End, Tarkoff tracks down Joanna in the past and tries to prevent her from leaving, while Frederick becomes suspicious of Ingrid’s sincerity in wanting to go to Asgard and Dash’s dark secret begins coming to light.

The two-hour second season finale of Witches of East End airs Sunday at 9:00 on Lifetime. You can check out an additional preview of the finale here.

Which member of the Beauchamp family do you think is in most danger? Will Ingrid be able to find a way to reverse the spell that Killian enacted by drinking the poison? How will Dash protect himself once word of his wrongdoing becomes public knowledge?