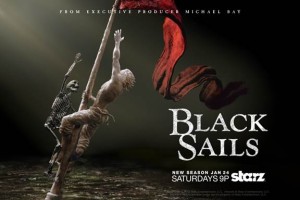 Starz has announced that the 10-episode second season of pirate drama Black Sails is set to premiere Saturday, January 24th at 9:00.

Having averaged 5.3 million viewers during its eight-episode first season, Black Sails will pick up its second season with Flint and Silver having had their backs pressed against the wall once the crew of the Walrus found out about their crimes. While the crew must decide whether they intend to go after the Urca or hold their captain accountable for what he’s done, Eleanor will be battling New Low, a blood-thirsty pirate who threatens her position as the head of Nassau. But the entire fabric of the island will be forever altered when its power players learn about a prize that was smuggled onto Nassau’s shores, something that could shift the balance of power and make one of them a very rich individual.

Black Sails joins a 2015 lineup for Starz that includes the second half of Outlander‘s first season, the third season of Da Vinci’s Demons, the second season of Power, and the first seasons of ballet drama Flesh and Bone and Seth MacFarlane comedy Blunt Talk.

Will you be watching the second season of Black Sails? Do you think that Flint and Silver can work together now that their secret has been revealed? Is Eleanor going to be able to keep her grip on Nassau now that the number of threats against her has risen?