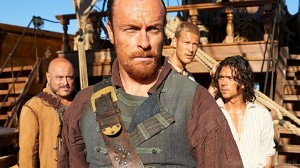 Starz has released a new trailer for upcoming pirate drama Black Sails, a series said to mix literary characters from Treasure Island and prominent historical figures. Set two decades before the events in the Robert Louis Stevenson novel, Black Sails tells the story of feared pirate Captain Flint (Toby Stephens) and the battle for control of New Providence Island. A criminal mecca that is one of the last places yet to be touched by English rule, New Providence is where a pirate can be a pirate and where anything (and everything) goes, but Flint and his men, including new addition John Silver (Luke Arnold), will have to defend it from impending threat with all their might.

In addition to Stephens and Arnold, Black Sails stars Mark Ryan (The Prestige) as Quartermaster Gates, an intermediary between Flint and the rest of the crew; Tom Hopper (Merlin) as Billy Bones, a trustworthy crew member; Hannah New (The Boat) as ambitious Eleanor Guthrie, the most powerful person on New Providence; Jessica Parker Kennedy (The Secret Circle) as Max, a prostitute who works on New Providence and who has had to take care of herself from a young age; and Zach McGowan (Shameless) as Captain Charles Vane, Flint’s most dangerous rival.

The series premiere of Black Sails is set to air Saturday, January 25th at 9:00 on Starz. You can check out a nine-minute inside look at the series here, as well as a first look here and an additional trailer here. Due to a strong reception at a Comic-Con pilot screening, Black Sails has already been renewed for a 10-episode second season, which began production this past November.

Will you be watching Black Sails? Do you think a pirate drama can survive and thrive on television? What has been your favorite trailer/promotional video thus far?