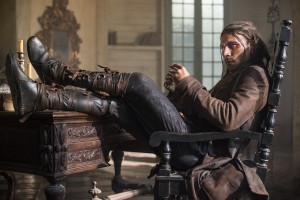 Starz has made the first episode of upcoming pirate drama Black Sails available for viewing on its Youtube channel one week ahead of its television premiere.

Said to combine a more grounded look at the golden age of pirates with fictional characters from Robert Louis Stevenson classic Treasure Island, Black Sails tells the story of fearsome Captain Flint (Toby Stephens), who takes on an addition to his crew in young John Silver (Luke Arnold) at the same time that New Providence Island, a pirate criminal haven, has come under siege. There are very few places where a pirate could be a pirate anymore at that period in time and Flint would be damned if he let go of New Providence, one of the last places untouched by English rule, without a fight. But is he going to be able to combat all those who seek to take control of the island? How much loss is he willing to suffer in order to keep the island to himself?

The series premiere of Black Sails is set to air Saturday, January 25th at 9:00 on Starz. You can check out a trailer for the show here, as well as a nine-minute inside look at the production here.

Will you be watching Black Sails? Does a cable network making the first episode available ahead of time make you more apt to give a show a chance? Once you’ve watched the Black Sails series premiere, how does it compare to the promotional material that has been released thus far?