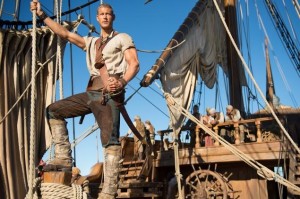 Now that Eleanor has opted to chase the Urca with Flint over running away to start a new life with Max, there’s a huge target on her back and even more massive weight on her shoulders, as there are other people who would do any and everything they can to locate the Urca before her and Flint. If she manages to find it and get even a small cut of the fortunes that lie within, she would be able to further invest in New Providence and provide a boost to the bustling island that she helped build from the sand up; however, there’s no guarantee that Flint would be willing to part with any of the money or that he will be able to survive the hunt for the Urca, even with the time he bought upon murdering Singleton, since he’ll soon become an even bigger target than Eleanor. Is Eleanor heading for disappointment in dedicating the foreseeable future to finding the Urca?

Listed below are the dates, titles, and descriptions of the next six episodes of Black Sails.

Saturday, February 8th – “III.”
A partner is sought to assist in the hunt for the Urca d’Lima; Silver comes up with a solution to Billy’s morale issues; a suddenly reasonable Vane makes an impression on Eleanor; and Gates is promoted.

Saturday, February 15th – “IV.”
Disaster strikes a mission undertaken by the Walrus crew; Flint is warned about Billy; Rackham and Bonny set out to recapture their livelihood; Eleanor’s father steps up to help her; and Vane is surprised by a visitor from his past.

Saturday, February 22nd – “V.”
Flint and crew engage in a deadly encounter on the open sea; Richard forces Eleanor to make a decision; Rackham tries his hand at a new career; and Bonny has a confession to make.

Saturday, March 8th – “VII.”
Flint comes clean to Gates; Silver is put in a tough position by Randall; Eleanor experiences loss; Rackham gets help from Max; and Vane has a life-or-death encounter.

Saturday, March 15th – “VIII.” (Season Finale)
The hunt for the Urca continues; Eleanor’s plans become unsettled; and Bonny and Rackham are haunted by their past indiscretions.

Black Sails airs Saturdays at 9:00 on Starz. The series has already been renewed for a second season.

Will the Urca be found this season on Black Sails? How will Eleanor handle the possibility of working with her father? Is Gates’ promotion going to drive a wedge between him and