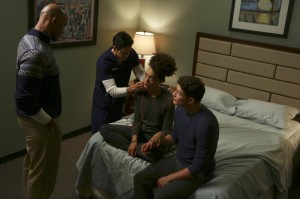 For one reason or another, Miranda has been stuck on Earth following her death, even when the jar that Collins kept her hair in was broken. That tends to mean that there’s some type of unfinished business that she has to attend to, some mission out there that she must complete before her spirit can rest. However, Miranda has no idea what she’s still doing in this realm of existence and as such, has been feeling down about her place in the group. As long as the jar is still in Collins’ possession, she won’t be able to leave the mortuary residence and even then, she’s already butted heads with Grunwald’s mother, who wants nothing more than the curse surrounding the town to continue so she can continue watching over her daughter.

On the next episode of Ravenswood, Miranda finds a way to leave the Collins residence and accompanies Caleb on a meeting with Mr. Price. However, while there, she overhears the skeptical teacher talk down on the idea of ghosts and unfinished business, exacerbating her insecurities and really making her question why she wasn’t allowed to rest following the car crash. Although not having done anything during her life and trying to figure out what she has to do to move on are issues that stay in the back of her mind, being confronted with the reality of her existence is something that Miranda wasn’t expecting; hearing how bad things are and how most people don’t even believe she exists serves as a reminder of where she is, who she is, and the ceiling on her future. Will Miranda be able to shake off hearing Mr. Price speak her fears and continue helping Caleb and the others break the curse that threatens their mortality?

Elsewhere on Ravenswood, Remy’s stint in a sleep clinic proves to be more dangerous than her sleepwalking, while Olivia finds out new information on Springer and Miranda discovers that leaving the Collins residence has certain circumstances.

Will Miranda eventually figure out why she’s still trapped on Earth? What could be causing Remy problems at the sleep clinic? Is there a chance that Springer can help Olivia piece together more information on the pact?