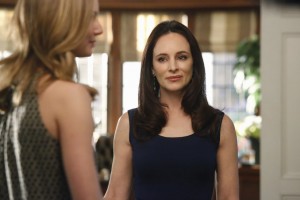 Emily Thorne had the opportunity to get away from it all – the mission, the Hamptons, the Graysons – and start over for a second time, this time with Aiden by her side. She would never have to worry about a scheme falling apart or having to cover a lie to a loved one with another lie; instead, she would get to live the life that she was always denied, the life that she would have gotten to live had her father not been set up. That normalcy, though, is arguably scarier for Emily than anything she’s encountered in her decade-long quest for vengeance and when she found out from Victoria that the gun shot left her infertile, it was motivation enough to run away from normal and embrace the life she knows.

On the next episode of Revenge, Emily has rededicated herself to her mission and her marriage to Daniel, despite the fact that he can hardly stand the sight of her. That dedication, ironically, only causes things between them to become tenser, especially once Emily confronts Sarah with the intention of scaring her away from Daniel. However, at this point, Emily is dangerously close to losing the plot and allowing her emotion take control of her mission, something that she’s done well at avoiding since the inception of her mission. For years, Emily has been logical and calculating, always planning for the worst case and taking care of potential problems to her plan, but if she’s not careful, all the work that she put into her cause of vengeance on the Graysons will have been for naught.

Do you think that Victoria was telling the truth when she told Emily about the effect of the gunshot? Has Emily become her own worst enemy this season on Revenge? How far will Emily and Daniel push each other before things get messy?