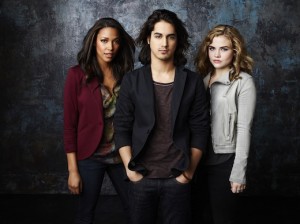 Ever since Danny first arrived back home from juvenile hall, he’s never been able to fully relax while in and around Green Grove, as the town has made clear that they don’t trust him and that they feel he’s apt to kill someone again. As much as he’s tried to atone for what he did and show people that he learned a lot while serving out the punishment for his crime, no one really seems interested in getting to know him or finding it within themselves to absolve him of the sins he committed as a child. As such, his decision to run away in the Twisted summer finale, born out of desperation and the need to put distance between himself and the Green Grove police, wasn’t exactly hard to make.

But what if he had a reason to come home?

Danny’s always had a hole inside him due to the absence of his father, an inner sadness that never went away no matter what he did. Finding out that his father was alive and in town could keep him from skipping out altogether on the life he knew and give him the type of hope and purpose that he’s been lacking since returning from juvie. However, that’s all assuming that Vik would A) want Danny to know that he was home; B) be open to talking to/having a relationship with the son he left behind; and C) still be the same Vik that Danny knew (and loved) when he was younger. There’s always a chance that Vik isn’t the fun-loving soccer nut that Danny remembers, that the years they’ve been separated have changed his father to a man he would never recognize, that the reason his father faked his death is something that Danny would be better off in not knowing.

However, considering the way his time in Green Grove, as well as his relationship with Karen, has gone thus far, Danny might be willing to risk getting to know his father one more time.

The winter premiere of Twisted is set to air Tuesday, February 11th at 9:00 on ABC Family.

Would Vik coming back to Green Grove bring Danny home? Why do you think Vik faked his death in the first place? How much more does Tess know?