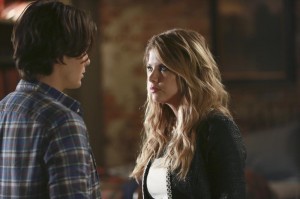 Caleb has been especially careful to keep his life in Rosewood and his life in Ravenswood separate, as he doesn’t want any more people to be dragged down into the abyss of the curse. If that means he has to push people away or be a little more secretive than he would like, then he’s willing to risk them being temporarily mad at him than having them put in danger over their association with him. However, Hanna isn’t ready to accept the things that Caleb is saying at face value and on the winter finale of Ravenswood, she makes her way to town to see just what’s going on.

However, before Hanna can have the heart-to-heart with Caleb that she needs, she runs into Mrs. Grunwald, who convinces her to stay in town when she wonders whether she should just go back to Rosewood. While Hanna did come all this way already, making a return trip back without at least seeing Caleb all the more disappointing, it’s hard to know whether to trust Mrs. Grunwald and whether she has an ulterior motive in wanting Caleb and Hanna to be in the same place at the same time. We’ve seen that she’s not nearly as sinister as Mr. Collins and that she’s extended the type of kindness to both Miranda and Caleb that Collins failed to do, her position at the funeral home seemingly more out of love for the spirit of her mother than any desire to bring harm, but you can’t trust that anybody or anything in Ravenswood is who or what they seem, not when the curse has so ingrained itself into the fabric of the town’s identity. But Hanna might be willing to risk running into whatever the town has to offer in order to get answers from Caleb and find out everything he’s had to deal with since arriving in Ravenswood.

Elsewhere on Ravenswood, Luke and Olivia find out what happened to their father, while Dillon makes a drastic move and Remy goes missing, leading the other members of the Cursed Five into an intense showdown with greater stakes than any of them realize.

Ravenswood airs Tuesdays at 9:00 on ABC Family. You can check out a review of the most recent episode here.

Would Hanna believe that Caleb has been talking to Miranda’s ghost? Who do you think was responsible for killing Luke and Olivia’s father? Will the remaining members of the Cursed Five escape the final showdown with their lives?