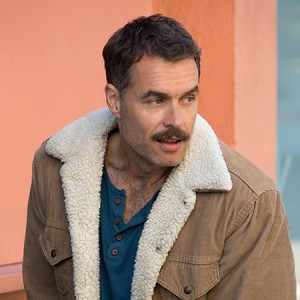 The root of Dom’s insecurity has been his resistance to change. For years, he’s been stuck in the same holding pattern of hooks ups with younger guys and waiting tables, which might have held some type of value for him in the past but now fills him with regret and self-hatred. Dom wants to live the life that he always wanted to, opening up a restaurant and finding someone to settle down with, but he hasn’t been able to break himself of the behavioral patterns that keep him from advancing as a person and a businessman. It will take something drastic to snap him out of the rut he’s put himself in and on tonight’s episode of Looking, he finds just that, albeit in a different package that he might have expected.

Already feeling reinvigorated enough by his verbal beat down of Ethan, Dom strikes up a conversation with local entrepreneur Lynn, who owns a prospering flower shop in the neighborhood, while in the sauna. Though Lynn might be older than the guys that Dom typically goes for, he nonetheless draws Dom’s attention for his physical appearance, financial/social stability, and the kind words he imparts, the last of which is especially intriguing for the aspiring restaurateur. Dom’s life recently has been filled with an endless string of guys who want nothing more than what’s between his legs, guys he has nothing in common with outside of the bedroom, and while the sex may make him feel better for a little while, it ultimately leaves him feeling empty. He’s not in the same emotional place that he’s been and he knows that it’s time for him to try something different and to seek out a guy who makes him feel better about himself, someone aspirational like Lynn.

Elsewhere on Looking, Agustin gets fired by Stina over his comments about her chair sculpture, while Patrick and Owen meet Kevin, a gay Brit who turns out to be Patrick’s new boss, at a video game launch.

Looking airs tonight at 10:30 on HBO. The same episode will air in the show’s regular timeslot tomorrow, with the show resuming its regular Sundays at 10:30 premiere schedule for the rest of the season.

Do you think Dom will let himself like someone different than the guys he typically goes for? How will Agustin handle being fired from the chair project? Is Patrick going to get along well with his new boss?