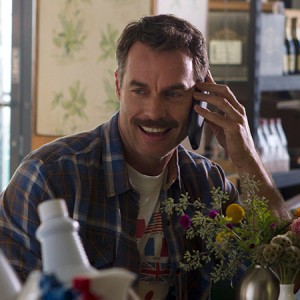 Patrick goes to Willy’s, the barbershop Richie works, hoping to steal a moment to talk. However, when Richie comes outside, he makes it clear that he’s not in a mood to engage with Patrick after what happened on the way to the wedding and that he needs space if they have any hope at resuming their relationship. Agustin waits up on Frank at their apartment and learns that he had spent the night with their friend Jesse; Agustin wants to talk things out rather than end a long-term relationship and follows Frank to the bathroom, where he begs to be heard out and admits that the project with CJ was wrong on every level. Frank’s response is to lay into him, telling Agustin he doesn’t know who he is, the concept of the project was the stuff of bored rich kids, and he’s never going to be an artist or anything other than mediocre.

While Dom calls Lynn to check on the flower delivery and inquire about his presence at that night’s popup, Patrick heads to work, late for a meeting with Kevin and the rest of the team. Afterward, he has his lunch on the roof and Kevin joins him, trying to talk to him about the kiss at the wedding. However, Patrick calls it water under the bridge and won’t engage Kevin about their awkward moment. That evening, he runs into a wasted Agustin, who took some ecstasy he had in his drawer, outside Punjab. The two make it in to Dom’s decidedly unpopulated popup and while Dom sees to a group of Lynn’s friends that come in, Patrick fills Agustin in on the recent complications in his love life. Agustin questions whether Richie is just done rather than needing space and what exactly about Richie Patrick likes; Patrick says that he likes how sweet, genuine, and scorching hot Richie is while trying to keep Agustin away from the wine.

Lynn ends up bringing a date to the popup, a handsome younger man who makes Dom feel insecure enough to go into the kitchen and take a moment for himself. When, of course, he’s not dealing with a potato shortage and Doris talking about sitting on Lynn’s date’s face. While Agustin and Patrick go outside and talk about how the latter has a thing for Kevin, Doris finds Lynn in the restaurant and tells him that while Dom can be hard-headed, he just wanted to know that he could trust his instincts and that he’s able to do a good job on his own. Before she lets him go, she simply tells Lynn that Dom’s worth it, meaning that he’s worth investing the time and effort in regarding a relationship.

Agustin brings up the idea of moving back in with Patrick and resuming their Golden Girls Saturdays, but Patrick says that he has to have time to think about it. Not helping things is that Kevin won’t stop calling and Agustin forces Patrick to answer, which leads to him having to leave and go into work. However, when he gets to Most Dangerous Games, he learns that Kevin took care of the issue and instead wants to talk about the kiss over a beer. Patrick tries to shut him down, but Kevin tells him how much effort it takes to not kiss him in public and how he can’t get him off his mind. Uncomfortable, Patrick wants to go and Kevin kisses him twice; Patrick kisses back and soon enough pants are off and the two are having sex on the floor of the office. Afterwards, he asks what’s next for them and Kevin doesn’t know. Back at the restaurant, Lynn prepares to leave and compliments Dom on doing a good job with the popup. Dom pulls him aside and tries to apologize for being an asshole before proposing that the other day count as something of a learning curve and that they continue doing popups together. Which, he adds, could lead to something more permanent. Lynn confesses that after tonight, their working relationship comes to an end and Dom kisses him accordingly.

Patrick makes it home and runs into Richie, who is waiting for him at his steps. This time, Richie does the talking, as he tells Patrick that he felt disrespected after what happened on the way to the wedding and that he’s still working on dealing with his pride issues. He continues that Patrick rushed everything in their relationship, but he didn’t stop it because he liked him so much. In fact, Richie claims to be close to falling in love with Patrick and will only let himself if he knows that Patrick is ready for it, which he doesn’t think he is right now. Patrick cries and the two part ways with a kiss on the cheek.

Patrick goes in his place and finds Agustin asleep on the bed with the Golden Girls on pause. He unpauses and begins trying to cheer himself up.

Additional thoughts and observations:
-“I just wanna lick his armpits all day long.”
-“You’re so Mother Hen.”
-I still think Agustin is an asshole, but this is the first episode where I felt more sympathy for him than I did annoyance. I feel like I understood what made him tick (insecurity, jealousy) and why he clung so tightly to Patrick (latent attraction, fear of being left behind), so it was nice for that to manifest itself into him being a character you empathize with; the show decided to play on how sad a person he is and it definitely humanized him vs. the prick that he had been written as prior to tonight’s episode. As much as I loved Frank telling him how it is (I love Frank in general, but y’know), hopefully all this will lead to a better, more self-aware Agustin in season two, one who has known what rock bottom feels like and wants to do anything in his power to avoid going there again.
-If you didn’t cry at Richie showing up at Patrick’s place with the hat from the pilot on, you are a cyborg. If you didn’t cry at all the beautifully real things Richie told Patrick, you are a cyborg. Because that was a stunning gut punch of a scene that highlighted everything I love about their chemistry and the dynamic that exists between the two characters.
-Doris coming through in the clutch to help Dom land his man. Her telling Lynn that Dom was worth it was very touching, especially coming from a comedy-heavy character, yet I couldn’t relax until I saw Lynn kissed him back. Even though bringing a young guy to the popup was a bit of a clueless move, especially since he knows Dom’s insecurities about his age and the feelings that existed between them, I’m glad that Dom has found somebody who could be more than just a one night thing and that it looks like everything’s finally turning around for him.
-That being said, I expected Lynn’s date to be Ethan, since the episode description made it seem like the identity of the date (and not just the general appearance) was going to be a big thing. Silly HBO.
-Let’s have a moment of silence for that sex scene between Kevin and Patrick. Because I honestly can’t remember the last time there was a scene like that with two gay men that wasn’t on a drama with a heightened reality (e.g. Spartacus) and that was a long time coming. And I love how it wasn’t just an implied thing – they stayed on the scene and Jonathan Groff’s face for much longer than what I expected.
-I’m very much #TeamRichie and all that, but Russell Tovey’s delivery of his “you don’t know how much effort it takes not to kiss you” spiel was incredibly sexy. I would have given it up, too, Patrick. Don’t worry.
-The final scene might have been the best use of a Golden Girls reference that I’ve ever seen. It was such a bittersweet capper on an emotionally complicated finale and boiled the show down to its essence – for all the talk of romance and love and such, this is a show about friendship and Agustin moving back in only underlined that point. It feels as if season two will pull Dom, Agustin, and Patrick together a little more, since they were kind of floating off in their own spheres for much of season one, and I’m excited to see how that changes the feel of what we know Looking to be.
-Thank you guys for hanging with me and my coverage of Looking this season. Please tell your friends, family members, or anybody you think would love this show about its existence. We barely got a season two and this is the type of show, both in terms of quality and importance, that deserves to stay on for quite some time.