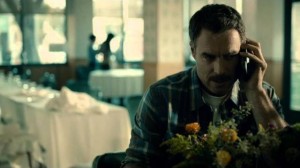 Patrick’s insecurity and history of self-sabotage struck again last week on Looking, as he managed to drive Richie away moments before his new boyfriend was set to meet his family. It was another in a long line of poor decisions by Patrick, all subconsciously designed to keep him from having to open up to another man and publicly embrace his sexuality rather than mask it, yet by the end of the wedding, he realized just how much of a jerk he was for treating Richie the way he did. Thanks to the conversation with his mother, Patrick had a grand epiphany about the way he’s been living his life and how he’s become his own worst enemy when it comes to finding the happiness and fulfillment he’s been searching for since he came out.

On the season finale of Looking, Patrick must now go to Richie and somehow keep their relationship from imploding even more than it already has. But it’s going to be difficult since Richie takes commitment very seriously and things with Patrick took a noticeable downturn when they went from simply having a good time to being boyfriends; he might be able to forgive Patrick for what happened, just because he can’t afford to have baggage like that weighing him down, but it’s going to take a lot for him to give the relationship another chance. For Richie to want Patrick back in his life, he’s going to have to see something in his (former?) boyfriend that shows him that things are going to be different, that Patrick is ready and willing to commit himself to their relationship and that he has a better understanding of himself than he did previously. If none of that is apparent, Richie could opt to cut his losses and move on, leaving Patrick with more regrets than he knows what to do with.

Elsewhere on Looking, Frank tells Agustin what he really thinks about their relationship and his art, while Dom is surprised at Lynn’s guest of choice for the restaurant popup.

Looking airs Sundays at 10:30 on HBO. The series has already been renewed for a second season.

Should Richie forgive Patrick for his behavior before the wedding? How will Agustin handle Frank’s moment of brutal honesty? Who could Lynn be bringing to the restaurant popup?