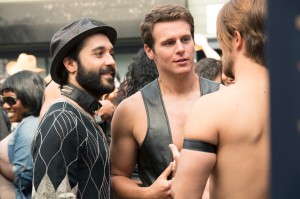 According to TVLine, HBO comedy Looking will have an expanded second season, as the Michael Lannan/Andrew Haigh project’s episode count has gone from eight in season one to 10 in season two. Three recurring players from season one (Raul Castillo, Lauren Weedman, and Russell Tovey) were already promoted to series regular status when the comedy was renewed for a second season this past February.

While Looking wasn’t impressive in the live ratings, the series managed a second season renewal due to strong HBO Go figures, a groundswell of critical and fan support, and building in the live ratings for several consecutive weeks after a nearly disastrous debut. The series is more plot-y than your average comedy and thus could use the expanded episode count to great effect, further fleshing out its world and exploring nuances that might not have been tenable had HBO kept them at eight episodes.

Centered on three gay friends living in San Francisco and dealing with issues in their personal and professional lives, Looking stars Jonathan Groff (The Normal Heart), Murray Bartlett (All My Children), and Frankie J. Alvarez (Smash).

The second season of Looking is set to premiere in early 2015 on HBO. You can check out a recap of the first season finale here.

Do you think an expanded episode count will be good for Looking? Will we see Patrick do the work to make getting back together with Richie a possibility in season two? How will Kevin figure into Patrick’s love life now that the latter is single and vulnerable?