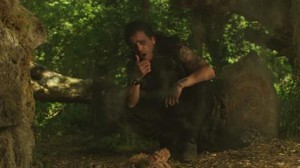 Ever since Bo escaped the train the Wanderer sent her to, she’s come to realize that as much as she may love her friends, this is a journey she has to make on her own. In order to find the answers about herself that she’s so desperately seeking, it’s got to be her that sniffs out the identity of the Wanderer and it’s got to be her that uncovers the circumstances behind her newfound allegiance to the Dark. Bo might have learned how to let people in since Lost Girl began, all by coming to terms with who she is and the fact that she didn’t have to be a killer, but the growing distance she feels from her friends will only motivate her to push harder toward self-actualization.

On the next episode of Lost Girl, Bo’s quest for answers has led her to a murder of crow Fae that inhabit a nearby woods. She’s faced down many a Fae in her day, but the trip into the woods is less about cleaning house and more about using their power to fill in even part of her memory. As much as Bo would like the part of herself that’s missing to magically return, giving her the sense of self and feeling of control that she’s been missing for quite some time, even a tiny lead from her newfound friends would be better than nothing; after all, she was a private investigator for some time and has proven capable of doing detective work far beyond the reach of many Fae, so all it could take for her to uncover the truth behind the Wanderer is one name, one location, one tiny clue that she could magnify into something much greater.

Elsewhere on Lost Girl, Kenzi makes it her mission to find out what Trick’s hiding.

What do you think Trick is hiding about the Wanderer? How will the jar that Bo found in the last episode play into this? Is Bo truly ready for whatever turns up regarding the Wanderer and her place in the Dark?