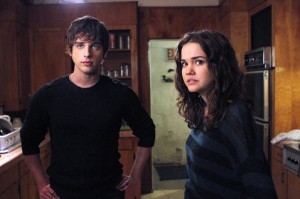 After running away from home, Callie’s ideas about what her future would look like changed. She had started gaining a sense of optimism about the direction her life was going when she saw that Lena and Stef weren’t like the other foster parents she dealt with, but when Jude berated her for possibly messing up their situation, she opted to leave behind the promise of stability, nurturing, and happiness for herself. In Callie’s mind, staying there and letting the kiss come to light would only hurt Jude further, so instead, she hit the road and assumed that she would be able to make a life for herself. But it wasn’t until she talked to Daphne and learned of the independent living program that she found the situation that she was looking for, though she still hasn’t told Lena and Stef about her intentions.

On tonight’s episode of The Fosters, Lena and Stef learn about what Callie wants to do with her life from Rita and as expected, the two are split. Stef isn’t having the idea of letting a teenage runaway make such a major decision about her life, while Lena seems to be more understanding that Callie’s not control over her life and that being able to make a decision like this could do her some psychological good. Part of what motivated Callie to seriously consider the independent living program is her misconception that Brandon is the only member of her former family who still cares about her, but even when Lena and Stef go out of their way to make sure that she knows she still has a place with them, will Callie believe what they have to say and come home to be with Jude? Or is she serious enough about the independent living program to where nothing can distract her from her ultimate goal of independence and a life of her own?

Elsewhere on The Fosters, a miscommunication at Girls United’s Family Day makes things awkward between Callie and Brandon, while Jude must decide if he wants to go forward with the adoption and Lena attempts to convince Stef to make amends with her father after he makes a grand gesture.

The Fosters airs tonight at 9:00 on ABC Family. You can check out a recap of the most recent episode here.

Should Callie continue toward her goal of being accepted into the independent living program? Will Jude decide to continue with the adoption and officially join the Foster family? Is Lena in the wrong for pushing Stef toward reconciling with her father?