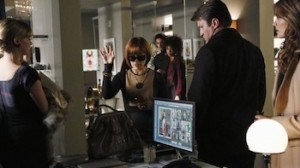 A wedding dress and a wedding venue! Everything is happening! Monday night’s episode of Castle was absolutely superb! If only I could hug Elizabeth Beall, who wrote Monday’s episode. “Dressed to Kill” was highly anticipated and it definitely lived up to the hype.

Frances Fisher was perfectly cast as Matilda King the Editor at Modern Fashion Magazine. She was a Legend, a dragon lady who chewed people and spit them out, but I would say with a sensitive side. We definitely saw that when she got Kate to do her a favor and try on that dress. Oh that lovely dress. More on that later.

So, the case this week brought us back to Kate’s past as a model. I’m sure nobody forgot that huge detail about Detective Beckett. Matilda King, Editor at Modern Fashion Magazine definitely didn’t. Matilda still remembered Kate when she modeled because she offered Kate a job but she said no. In fact Kate was the only person to ever tell Matilda no.

The victim this week was Ella Hayes. She was found in a dumpster. Cause of death, strangulation. She was a former assistant for Matilda King at Modern Fashion Magazine. Never once did I believe Matilda committed the crime but I was totally right about Julian Bruckner, played by the always handsome Rob Estes. Seriously? Does that man not age? I called it almost immediately. Side note: I’m usually never right about who committed the murder, so I was really happy this week.

I cheered Matilda on while she confronted Julian, the ambitious creative director. Julian knew that the designer Yumi, played by the always hilarious Rex Lee, had stolen Ella’s designs and earned his Fab Five ranking by Modern Fashion the wrong way. If it ever came out that the magazine knew about the stolen designs it wouldn’t be good for business so Julian strangled Ella to death with the scarf.

Now for the moment I’ve been dying to talk about! Kate trying on that dress for Matilda left me speechless. She looked absolutely stunning. Maybe it’s me being overly dramatic, but she really did look like a princess. I’ll be honest, when I first saw that promo pic with Kate in the dress I really wasn’t impressed, but seeing it now on screen, I’ve changed my mind. It was absolutely gorgeous. Seeing Kate in it got me emotional and I couldn’t help but tear up. Matilda was speechless and I couldn’t blame her. It was such a sweet scene between them. Frances Fisher and Stana Katic had great chemistry together this episode. I wouldn’t mind seeing her character pop up again somehow.

Matilda: “If I had a daughter this is the exact dress I’d want for her. You are going to make a beautiful bride someday.”

When Kate stood there looking at herself in the mirror then teared up, it made me so sad. Stana was amazing in that moment. I know I’ve said it a million times but Stana doesn’t even have to have any lines, her looks say it all. In that very moment she was thinking about her mother. That scene is probably one of my favorites in this entire season 6. 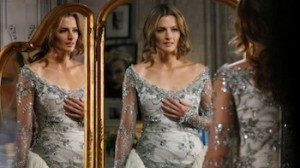 If you got all excited about the wedding dress, I’m sure you were just as excited as me about talk of a wedding venue. Things were happening and I was very excited. Castle and Beckett saw an ad in one of the wedding magazines about The Cordova House. I thought for sure it would have been the venue but it was not meant to be. When Kate couldn’t get away from the case to see the venue, she told Castle to take Martha. From what we saw, it was gorgeous and it just so happened there was a cancelation and there was an opening for spring 2014! Unfortunately Kate got cold feet and they missed their opportunity. Kate said she didn’t want to rush things, there’s still lots of planning but that wasn’t the whole truth.

I was so happy when Kate told Castle she wasn’t sure she could do all the wedding stuff without her mother and that’s why she got cold feet. I didn’t blame her one bit. I’m not married, but it’s probably one of the biggest things in anyone’s life and to do it without a parent is extremely hard. Kate’s mother has always been a huge part of her life, while she was alive and in her death and for her not to be there on Kate’s big day was upsetting to her.

I started to cry again when Kate told Castle that her mother would have loved him. I didn’t doubt that for one second. I was so happy when Kate said she wanted to find a new venue for the spring. She didn’t want to wait. Plus, she already had the dress. I had the biggest smile on my face when Kate walked into her apartment and saw that huge box with a bow. I knew immediately it was the wedding dress and that note Matilda wrote for Kate, perfection!

“Kate, This dress looks better on you than it ever could on the pages of a magazine. You’ll made a beautiful bride.”

I’m getting so excited for the wedding and it’s only February. I think back to watching the pilot, never in my wildest dreams did I ever think Castle and Beckett would get married. I remember thinking halfway through season 4 they wouldn’t even get together. Now look at where they are. It brings such a huge smile to my face. Such character growth in this show and we owe it all to Marlowe and Co. I truly believe they love this show and the fandom and that’s why I always trust them with the show I love.

What did you guys think of the episode? Did you love it as much as I did? Sound off below!

Castle: “She was killed by a little old lady, or Katy Perry.”

Matilda: “I never could forget those cheekbones.”

Castle: “Murder is the New Black.”

Castle: “Murder is not his type of accessory.”

Castle: “Their unfortunate misery can be our life-long joy.”