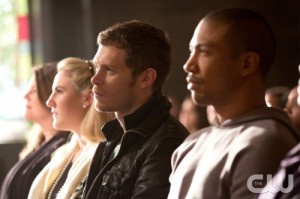 Hayley’s discovery that her family has been living in the bayou is a double-edged sword for the young werewolf. While the history of her lineage is now within reach for the first time in her life, which would help her gain the sense of self that she’s been lacking thus far, anyone and anything living in and around New Orleans is in danger thanks to the struggle for control of the city, as well as the impending war between the witches and vampires. Just as Hayley made great progress toward understanding herself and finding the feeling of belonging that she’s never known, she has to worry about Klaus power tripping his way through her clan or strong arming Elijah into leading him right to the source of the werewolves.

On tonight’s episode of The Originals, it’s a full moon in New Orleans, meaning that Hayley’s family will get the night to return to their human forms. However, they’re walking into the middle of a New Orleans that could turn them into collateral damage or weapons used against another faction in hopes of gaining control of the city. Even though Hayley has Elijah and Rebekah mostly on her side, the two have yet to fully swear off their allegiance to Klaus and if the new King of New Orleans makes a drastic play to destroy the witches once and for all, there’s a high probability that the werewolves will be involved and that no one will intervene on Hayley’s or her family’s behalves. Is Hayley going to be able to protect her family for the duration of the full moon and see to it that they make it back to the bayou alright?

Elsewhere on The Originals, Father Kieran has a run-in with a witch from his past, while Sophie makes a shocking discovery at the cemetery, Elijah finds himself having to choose between Hayley and his siblings, and Klaus takes desperate measure in the Cauldron following a failure.

Will Hayley’s family be able to make it through their monthly night as humans in one piece? What will Sophie discover while at the cemetery? Is there any chance that Elijah will side with Hayley and against both Rebekah and Klaus?