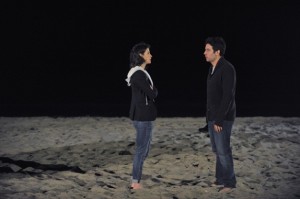 Alright, alright….I’ll admit it.  While I enjoyed watching Cristin Milioti play in last week’s 200th HIMYM, I was less than thrilled with the super-cramped, high speed storytelling that was not narrated by the mother.

But kudos to the show for trying to make me think it was a really special episode.

It would have worked so much better, at least for me, if last night’s hadn’t been yet-again, mother-less.  I had hopes that after the mother “met” Ted – which really didn’t happen in the such-titled episode – she’d come more into play.

And with a meager seven episodes left, isn’t it about time she does?

That being said, Ted’s apparent affection for the mysterious woman singing “La Vie En Rose” the night before was apparently irrelevant when last night’s episode began with he and Robin walking along the beach.  The stroll quickly turned into a reflection of Ted’s previous girlfriends, culminating in Ted admitting once again that he’s in love with Robin.  He lies to Robin that he hasn’t spoken to Stella, Victoria, and Janette – but he has.  Because he’s been trying to track down her grandmother’s locket.  Unfortunately for Ted, Janette tosses it over a bridge into water below.

When Robin questions why he suddenly broke up with Victoria after everything they had been through, Ted is forced to admit that it was because of her – that Victoria didn’t want them to be friends anymore.  But Ted’s okay with the wedding, because as he said in regards to his best balloon friend – if you love something, you can’t let it go or it’ll be gone forever.

Meanwhile back in the Inn, while Lily is off Marshall finds himself haunted by not one, but two ghosts of her – present day-Lily and 2006-Lily.  With some extra help from the ghost of his father he realizes that the New York versus Italy arguement is not a battle to be won.  Lily’s specter let’s him know that if they keep on acting like that way, he’s going to lose her.  But there’s no telling how this thread will unravel in the final episodes given the happy ending last night.

The most satisfying plot of the night belongs to Barney, who took it upon his drunken-self to educate two young, naiive men on “how to live.”  Though he of course has questionable practices (teaching the boys about strip clubs and how to play ‘Haaaave you met Justin?’) it’s a touching moment when he passes down torn pieces of The Playbook to them:

“Whatever you do in this life, it’s not legendary unless your friends are there to see it.”

Again, this was an absolutely necessary episode.  Ted seemed to finally let go of Robin?  And I hope it wasn’t just me confused by her floating off into the sky during a seemingly “real” moment.  The writers did a great job of incorporating Ted’s exes in a way that supported the plot, and who doesn’t love to see Tim Gunn?

Upon the end of the episode, I find that I’m left asking, where are we going from here?  It would seem like the majority of loose storylines have been tied off, except for the fact that Ted and the mother haven’t yet met.

Although….we still don’t know where Lily ran off to…

What did you think of “Sunrise”?  And what are your predictions for the final run of How I Met Your Mother?