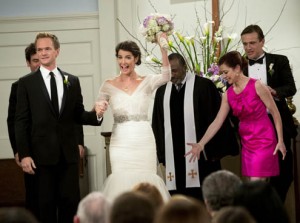 In this week’s installment of How I Met Your Mother, Barney and Robin finally – finally! – made it down the aisle.

After last week’s episode provided such an extensive resolve of the show’s peripheral characters, “The End of the Aisle” had a lot of work to do in allowing the wrap-up of Barney and Robin, and Marshall and Lily’s stories, given that Ted still has to meet The Mother and presumably decide not to move to Chicago.

Both Barney and Robin spend the episode more or less panicked about the whole ordeal – Barney writes novel-length and inappropriate vows, while Robin is well and truly convinced that she is making a mistake.  However, as always, their friends get them through it.

Barney, in a truly not-Barney fashion is completely losing it in the half-hour before the wedding.  It isn’t until Marshall and Lily try to help him write his vows that he seems to have an ephiphany.  But is it a good one?  More on that later.

Remember the locket that Jeanette flung into the river?  As it turns out, Ted dove in after it and has been holding onto it as a surprise for the bride, however, upon seeing Robin so distressed and believing that marrying Barney is a mistake, Ted gives it to his bro to give to her.  But of course, Robin knows immediately that Ted is really the one to track it down.  After attempting to convince him to run away with her, Robin flees on her own…and crashes directly into The Mother.

The still-nameless Mother gives Robin the simple advice to take a few deep breaths, in a way that is sweet and funny as we’ve seen from her character thus-far, and yet was still apropriate in the story as she’s still relatively a complete stranger to the famous five friends.

It is at this point that Barney – who previously seemed ready to jump ship on the wedding – walks in with a confession.  After previously refusing to take advice from Marshall and Lily since they just had a fight, Barney realizes that their biggest problem was Marshall not telling his wife the truth – and so, Barney vows to always be honest with Robin, thus taking a sledgehammer to her fear that he will always be a liar.

The episode also saw Marshall and Lily borrow the alter to revise their vows.  Their talk with the almost-groom opened their eyes that they can’t be perfect, and their vows should be realistic.  This was an excellent subplot that not only bolstered the tone of the entire show, but really served the couple themselves and highlighted how they’ve grown since their own nuptials.

“The End of the Aisle” also gave us the last slap, which, while seemingly  incredibly understated, also felt appropriate.  The fact that it was used to literally slap Barney in place as he’s about to bolt from the alter in nervousness somehow felt right – a way of showing that the series of slaps has led to this moment, if you will.  (Moreso, if you consider that the orginal slap bet was set because of Robin)

And yes – Barney actually got them a ring bear at the wedding.

This episode did a great job of following from last week, and leading into the series finale.  While somewhat gimmicky, as a fan of HIMYM I would’t believe it to be the end of the line if it wasn’t.  Marshall’s ‘vow’ puns were charming (“vow-za!”) and true to his silly character, and I would expect nothing less of Barney than to have a flower gorilla in line behind the ring bear.

But now that everyone has seen the end of their stories – or so it seems – the next and final hour of the show should hopefully actually revolve around Ted and the purpose of the show.  The Mother is still nameless, nor has Ted actually met her.  And of course, we will find out exactly why Ted is telling his children this 9  year-long story.

What did you think of “The End of the Aisle”?  Are you ready for the finale of How I Met Your Mother?  Drop your comments below!