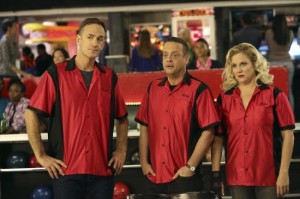 Debbie and Marty head over to the Bird-Kersees before their bowling league semifinals match and see, among other things, Larry’s wall of inspirational leaders (Genghis Khan, Winston Churchill, Scott “Charles in Charge” Baio) and a cardboard cutout of a scantily clad Larry. They learn that it’s been one year since the aliens decided to stay in the community and Larry defied his father, meaning that it’s about time for him to report in and prove that staying on Earth has been a useful endeavor. Unfortunately, Larry’s been stressed out lately over the impending check-in, so much so that his hair has gone flat and hasn’t been tease-able in weeks.

In the garage, Larry talks to his father through the computer and gets chastised for not having a tramp stamp or taking over a small government in his time on Earth. Larry tries to argue that he has, in fact, made progress while on Earth, with two little watched musical numbers, but he still has a lot to prove to his father if he hopes to stay in the community he’s trying to build. Marty and Debbie make it to their bowling match and while Marty is very good, Debbie isn’t, yet she has the most fun out of anybody. She dances, she gets giddy if the ball touches even one pin, and she annoys the heck out of the rest of their team, since they would like a chance to win the championship. Oscar and Lana, Debbie and Marty’s teammates, try to argue Marty into kicking Debbie off the team so that championship isn’t just a pipe dream.

While all this is going on, Jackie stays back and watches before striking up a conversation with a woman sitting next to her. She rambles about how Larry doesn’t pay attention to her or even seem to care about how she is and it turns out that the woman is Dr. Barbara Hartley, a therapist who gives Jackie her card and tells her to come in for an appointment with Larry. Elsewhere, Larry checks in with several of his key Zabvronian representatives to see what they’ve learned while on Earth, but he finds out that they’ve not really picked up anything either. Well, beyond an appreciation for the Matthew McConaissance and Natalie Portman’s sense of style. The Weavers make it home and Marty tries to get Debbie to quit bowling like Barry Sanders retired from football; however, all the adrenaline from bowling has gotten Debbie in the mood and rather than press her on the idea of quitting, Marty takes advantage of her good mood.

Dick Butkus, upset about having to be around decidedly immature Abby and Max, comes to the clubhouse and presents the youngest Weavers with separation papers. Since their friendship is breaking up over irreconcilable differences, he’s drawn up legal papers that divide the clubhouse time up. His plans? Put on a salon of higher thought and invite a series of influential thinkers with the intention of exchanging ideas. He ends up bringing Time’s Joel Stein, MSNBC commentator Lawrence O’Donnell, and Bill Nye the Science Guy to The Butkus Group, but things turn sour quickly, as Dick cuts O’Donnell off and comes down on Stein for wanting another juice box. Jackie returns home and brings up the idea of going to therapy to Larry, only for him to mock the suggestion and rip up the card she got from Dr. Hartley. However, Jackie ends up going on her own and pressures Dr. Hartley to speed up the sometimes glacial pace of therapeutic progress, seeing as how she’s not happy and doesn’t want to continue living this way.

Larry and Marty pace and mumble out in the yard and convene over what’s been troubling them. Larry mocks Marty’s problems in comparison to his own, but Marty inadvertently gives Larry a good lead by bringing up everything that Reggie has learned while being on Earth. In return, Larry tells Debbie about Marty wanting to kick her off the team and kicks her off the team himself as some sort of favor. In her therapy session, Jackie becomes overwhelmed by emotions due to no one ever listening to her and feeling as if she has no purpose; Dr. Hartley then asks her how she can make her current situation feel more like home. Back at the Bird-Kersees, Larry brings Reggie in to talk to Grandfather on the computer; however, Reggie’s contributions to his father’s cause include women liking to talk about their problems and also liking tapas, neither of which helps Larry look better in the eyes of his father. Grandfather believes the colony is worse off than he realized and since Larry is out of time, the best thing to do is send someone down to take over the mission.

Debbie comes back into the house upset at Marty’s betrayal and refusal to be honest with her and when Marty mentions cutting down on the dancing and focusing that energy on bowling, Debbie shuts down and simply says that there’ll be no more fun from here on. Outside the clubhouse, a lonely Dick gets approached by Max and Abby, fresh from throwing water balloons at cars. While one guy did give the finger, it wasn’t the same without Dick there to lecture them and he admits that maybe he was too quick to sever ties with them. The trio attempt to reconnect by throwing the remaining water balloons at Stein, Nye, and O’Donnell. At the bowling championship match, Debbie is still decidedly the weak link, the only person on her team not to bowl a strike; only this time, she’s not even dancing when she hits pins. At the end of the match, her team is down by one pin to the other team and it’s her turn to throw. Before she does, though, Marty pulls her aside and tells her that he was wrong for trying to stifle her fun, that watching her dance was the best part of getting involved in the bowling league. He affirms that they make the perfect team and she throws the last ball, missing every pin.

Jackie comes back from therapy and stands up for herself against Larry, telling him that she’s tired of him not paying attention to her and that the only way she’ll be happy is if they have another baby. While the Weavers come home celebrating, Larry goes to Dr. Hartley’s for a late night talk and a hooded figure arrives in the colony. It turns out the figure is Larry’s brother, sent by his father.

Additional thoughts and observations:
-“If you smelt it, are you, in fact, the one who dealt it?”
-“We’re not playing paperwork again.”
-“One therapy, please.”
-“I feel like a Meryl Streep highlight reel.”
-“Tell Dick and Reggie Grandpa Snuggy loves them.”
-“What wine pairs best with a husband’s betrayal?”
-“No more dancing. No more fun. I’ll be in the bathtub.”
-“Let’s have a terrible time.”
-“I want you to go out there and be adorably horrible.”
-As always, here’s a link explaining why I think ABC should renew The Neighbors. Feel free to share it across your social networks.
-However, since Toks Olagundoye has signed on to another project, I think my last strand of hope that the show actually will be renew has snapped. It could still be renewed, but at this point, with the way the end of the season looks to be written and Olagundoye looking for a way out, I’m very much doubting it.
-Third straight sexual/roleplaying tag, this time with Debbie’s three hall passes showing up in her kitchen like they do in a recurring dream of hers.
–Bill Nye the Science Guy. Bill Bill Bill Bill Bill Bill. Bill Nye the Science Guy.
-This Week in Neighbors Meta Moments: Larry brings up the Emmy nomination the show received; Grandfather mentions that not many people saw either musical number Larry put on; Jackie wants to be sure that her family permanently belongs on Earth – for at least a few more seasons; Dick can’t believe this is even a show.
-For those wondering, Larry’s hot brother is Joshua Sasse, who is starring in Neighbors‘ creator Dan Fogelman’s ABC comedy pilot Galavant. Which I’ve read and while I kind of loved it, I would rather have more of The Neighbors.
-I liked seeing Dick enjoy being a kid. His funniest moments are when they exploit him being in the wrong body and being much older than he seems (I love a good McLaughlin Group parody), but it was sweet seeing him bond with Abby and Max.
-Good for the show for shying away from the cliché of a last second pep talk leading to a miraculous athletic performance. Debbie sucks at bowling, but y’know what? She’s totally cool with that and I respect that attitude 1000%.
-Nice Home Improvement moment between Larry and Marty. I’m guessing that Marty is the Wilson in this instance?
-Next week on The Neighbors: Larry learns the real reason his brother has come to their community, while Amber confides in Debbie about her college boyfriend.