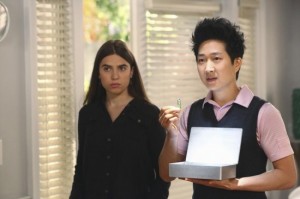 It’s another morning in the Weaver home, with the Weaver machine running on full power. Marty gives his customary goodbyes to his family before leaving for work, but things take a turn when Amber comes downstairs and snags Debbie for some girl talk. The topic? Her college boyfriend Zach. After the conversation, Debbie gets so excited that she sprints over to tell Jackie and meets Larry’s brother DJ Jazzy Jeff, who explains that he got his name from an MTV celebrity softball game before smelling Debbie’s neck. Larry comes into the kitchen, insults Jeff, and heads out to his therapy appointment with Dr. Hartley, to whom he explains everything that’s been going on in his life recently.

When Larry returns home, he addresses the rest of the colony regarding Jeff, only to find that everyone is smitten with his good looks and immense charm. Overhearing Larry’s concerns, Jeff steps forward and tells his brother that he has nothing to worry about, that he has no plans of speaking to their father about anything he sees there. While Amber and Debbie have their girl talk interrupted by Marty, therefore moving it upstairs, Jeff makes his way around the Bird-Kersee family, telling Jackie that she wants a girl to round out her family and suggesting to Dick that he find some way to challenge himself since he’s bored with 4th grade material. He then leaves to pick Reggie up from school, riding out in a customized BMW-esque golf cart that draws attention from the whole of the colony.

Jeff returns with Reggie and Jane, who run into Amber and Zach outside. After a goodbye kiss duel that ends with Zach and Jane leaving, Reggie and Amber joke about their choice in mates; however, Jeff pulls Reggie aside and discourages anything from rekindling with Amber, warning his nephew about what could happen if things with Jane don’t work out. Jeff doesn’t want Reggie to end up like him, alone and without anyone to spend his life with. That night, Marty unsuccessfully tries to get Debbie to spill the beans about what’s going on with Amber. As much as she wants to tell her husband what’s going on, Amber so rarely confides in her that she wants to hold this secret for another day before confronting it head on. Meanwhile, Larry discovers that Jeff has been exerting his influence over the family, as Jackie has seemingly gotten over her baby fever, Dick is pounding away at an essay on the computer, and Reggie has wrapped up a box of his baby teeth as a present for Jane.

As a result, Larry takes Jeff to therapy with a flirty Dr. Hartley. He tells his brother that he knows the real reason for this “visit,” while Jeff confesses that Larry is the one person he wanted to be liked by and the one who he can never seem to win over. Larry admits that he’s been under quite a bit of stress lately and that might have impacted his disposition toward his brother, so the two make up with a hug on the couch. However, after the two come back home, Jeff calls Grandfather and tells him that everything is going according to plan. After reading Machiavelli on the way to Earth, Jeff has made tremendous strides toward turning the Weavers and Bird-Kersees against one another, the most important thing that needs to happen if Grandfather is to get the colony home and the mission aborted. If Jeff needs it, though, there’s a box in his room that contains what could be a plan B.

The following day, Jeff finds Marty leaving for work and lets it slip that Jackie told him about Amber dating a college guy. As expected, Marty flips out and forbids Amber from seeing Zach; Debbie, though, is more upset at Jackie for telling the secret, something that she regularly does, and both Weavers get upset when they find out that Larry knew, too. While Jeff slips up to Reggie’s room and course corrects, saying that his advice the previous day wasn’t good and giving him the box that was in his bedroom, the Weavers and the Bird-Kersees have it out, with Marty almost hitting Larry for calling him “Farty Marty.” The fighting gets disrupted for a second when Dick comes in to proclaim that he got into Harvard, just as Reggie goes to Amber and asks if she loves him and if he had a way to turn home, would she consider being with him. The two confirm that they love each other and that they consider the other the love of their life, leading to a kiss and a surprise announcement to their parents. Reggie is going to consume the green vial that Jeff gave him and turn himself human.

A shocked, defeated Larry leans into his role as Supreme Leader and informs his family that there will be no Harvard nor any genetic mutations – they’re to pack up the house that night and leave for Zabvron the following day. Jeff has won.

Additional thoughts and observations:
-“I love this stupid family.”
-“Jackie, are you shooting a soap opera?”
-“Jude Law called. He wants his face back.”
-“Maybe he’s a little cool…”
-“Congrats. He’s very pretty.”
-“What, DJ Jazzy? Mr. Jazzy?”
-Once more for the cheap seats: Why ABC Should Renew The Neighbors. Tweet it, Pin it, mark it with a B for baby and me – whatever you would like to do. Just spread the word if you can, okay?
-For those wondering, this was the first episode of season two to be written by series creator Dan Fogelman, which might explain the unexpected return to the season one title card.
-Do you buy that Amber would purposely seek out Debbie for girl talk? We’ve seen her façade break multiple times this season and the reality of her love for her family shine through, but I don’t know if she would willingly tell her mother that she’s dating a college guy. I was weirdly happy for Debbie, though, since she kind of deserves a win in this department.
-4th grade killed me, too, Dick Butkus. Darn science classes.
-If DJ Jazzy Jeff smelled my neck, I would disintegrate into a million pieces. Kudos to Debbie Weaver for maintaining her composure in such an environment.
-I love how we’re getting more of the colony these last few weeks. As much as I’ve liked season two, it felt a little underpopulated for much of its run due to the show’s budget cuts, so it’s nice seeing people like Johnny Unitas and Mary Lou Retton, if only for brief scenes.
-This Week on Neighbors Meta Commentary: In Larry’s first visit to Dr. Hartley, he says that the show is laying it all out on the table. In his last visit, he tells us to tune in next week.
-Jeff’s BMW golf cart might be the best sight gag in a season full of strong sight gags. Also amazingly funny, Larry’s extended raspberry in therapy and Reggie breaking out the ‘ship names for him and Amber. #Amggie all day, every day.
-Hopefully, if the show is renewed, we’ll get a more in depth look at a baby Zabvronian, since Dick’s three-toed first footprint and talk of a deboning process piqued my interest. Season two has been much lighter on specific alien material, opting to lean on the culture clash aspect of the Weaver/Bird-Kersee dynamic, but I was never put off by that angle and was glad to see it somewhat return.
-I would like a solo-powered hammock, as well. Someone hit up SkyMall for me.
-Jeff watching the chaos in the Bird-Kersee kitchen while sinister music played in the background gave me Carrie vibes, for some reason. but Carrie if Carrie was a handsome British alien and not a psychologically damaged teenage girl pushed to her limits by her classmates.
-Finale predictions? It’s tough to get a read on what the show is going to do, but I think we’ll have a better sense of its renewal situation at the end of the finale. Since Larry and company resisted Grandfather at the end of season one and fought to stay on Earth, I kind of think they’ll end up going back to Zabvron.
-Next week on The Neighbors: It’s the season (and possible series) finale and while a pregnant Larry must decide whether he intends to stay on Earth, the neighborhood has two new visitors.