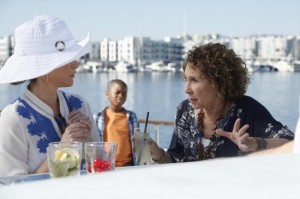 One night at dinner, Debbie receives a call from her mother Janet, who she told Max and Abby went to live on a farm with other grandmas. Instead, Janet just got a time share in San Diego in her latest divorce and she wants the entire family to come down for a visit. Although Debbie knows that her children should know both of their grandmas, it’s not until Larry and Jackie come over that she firmly decides to go through with the trip. The Bird-Kersees have been working themselves to the bone at their respective jobs and require a vacation, but Debbie knows that the aliens can serve as a buffer between her and Janet, keeping the two from having to be alone together for the entire weekend.

The day of the trip, everyone puts finishing touches on their packing, with Larry compiling a shirt suitcase with the various shades of pink in his wardrobe (pale, medium, dark, dark-medium), Abby telling Marty that she’s not packing a bathing suit because she’s still scarred from him almost drowning three years ago, and Reggie worrying about the impact a trip like this will have on his relationship with Jane. While Dick loads himself down with sunscreen, Debbie has begun listening to a self-help book full of positive affirmations, as she wants to get herself in a positive head space for when she has to deal with her mother. Though Amber is apprehensive about going on a trip with her ex, Debbie assures her that the worst is yet to come and soon enough, the Weavers and the Bird-Kersees are on the plane to San Diego.

Larry hates everything about it; Jackie marvels at the genial flight attendants; Amber lets Reggie know that she’s texting with college guy Zak; and Dick tries to get Max to put sunscreen on him while they’re inside, citing an Allure article from Nicole Kidman. For all the drama about seating arrangements, everyone makes it to San Diego in one piece, though both families are thrown for a loop when Janet introduces them to Benjamin, the 10-year-old boy she adopted four months ago, now technically Max, Abby, and Amber’s uncle. Janet assures them that she’s going to be a better mom that she was now that she’s given up smoking and gluten, but Debbie takes Marty out into the hallway to rant about this being yet another smoke screen from her mother and that the real Janet is in there somewhere, just waiting to come out. Marty gets her to calm down and remember that the kids are the reason they came in the first place and everyone heads to the beach, where Dick’s skin doesn’t take kindly to the sun, Ben and Max dig a hole, and Debbie tries to bait Janet into reverting back to her old habits by asking her to go to the bar. Janet, however, claims that she’s sober and Debbie’s jealousy at Benjamin grows.

Meanwhile, Marty takes Abby to the edge of the water and lets it wash over her feet in order to get her more comfortable with the thought of swimming. Though she’s initially receptive, she gets scared when he steps on a piece of a broken shell and runs far away from the water, just as Amber and Reggie’s competitiveness over their respective relationships intensifies over Amber trying to find Zak a cool rock and Reggie searching for shells for a necklace he’s going to make Janet. While all this is going on, the Bird-Kersees find themselves getting a massage, yet Jackie is the only one who enjoys it. Larry thinks the masseuse is perverted and refuses to pull down his sheet, opting instead to leave the room and (almost literally) drag Jackie along with him. Everyone reconvenes and heads to a docked boat for iced tea and a view of the harbor, where Jackie lays into Larry about him never wanting to leave his comfort zone and Amber does her best to keep up with Reggie’s description of his relationship with Jane. Out on the deck, Debbie again provokes Janet by mentioning that the bartender is eyeing her and the issue between them comes to a head, though Ben inadvertently overhears Debbie mention something about how Janet would just get bored with him and give him back to the adoption agency.

Debbie apologizes and Janet assures him that they’re together for life. Elsewhere, Amber and Reggie return from the upper deck of the boat and when she’s trying to take a picture of her drink to send to Zak, Reggie cracks and suggests that the two calm down on the competition to prove the validity of their relationships, lest it keep getting in the way of their friendship. Marty finds Abby in one of the rooms on the boat and talks her into coming onto the deck to see the ocean; he explains that he wants her to see the splashy, fun side of the ocean and that it would break his heart if he was the one responsible for her fear of the water. When they get out there, though, they find Jackie and Larry reenacting a famous scene from Titanic and Abby watches as Larry, who cannot swim, falls overboard. Marty dives in after him and she works up the nerve to get a life preserver and toss it down below, helping to save both her father ad her neighbor. Meanwhile, Debbie confesses her jealousy over Janet treating Ben the way she always wanted to be treated and Janet responds by telling her that she doesn’t know how her daughter became so great. She did such a poor job raising her first child, she argues, that she feels like she has to raise another to be able to say that one person came out well because of her.

Back at Janet’s, Amber and Reggie play Monopoly while their phones go off in the distance; Debbie gives Ben advice on how to handle Janet, including not eating the brownies and not letting her sleep past 2:00; Dick walks on looking browner than a biscuit; and Larry admits that after peeing on Marty mid-rescue, he might be ready to give up control.

Additional thoughts and observations:
-“Grandma has a sister?”
-“When does your parenting book come out?”
-“Classic Zak.”
-“Nicole Kidman told allure.com that you can never have too much sunscreen and home girl looks like a porcelain doll.”
-“Vacations are full of things I hate.”
-“I’m 8C.” “That’s a ridiculous name.”
-“And you must be Debbie’s estranged, slutty mother.”
-“Hi, I’m your uncle. You want to see my toys?”
-“Wife, sheet up!”
-“We’re like traffic updates, but hot.”
-“Peeing on Marty was a real game-changer for me.”
-If you guys missed my article about why ABC should renew The Neighbors, you can check it out here.
–Here’s the Renew The Neighbors Facebook page. Like it and explain why you want the show to return next season.
-What I like about the addition of the theme song this season, aside from how cheerful and tonally perfect for this show it is, is that it gives The Neighbors a chance to play around in their cold opens. There was one earlier this season where Larry sang the opening lines of the theme song and here, we got the very funny slurp from Marty followed by a awkward silence and then the theme song.
-Look at Larry Bird still having a job after completely botching Jay’s wedding present. Maybe he is the glue that’s holding the coffee shop together after all.
-I thought we were heading for a reveal of Amber only pretending to text Zak that weekend so she doesn’t look bad in front of Reggie, but I think I liked what we got better, if only for Tim Jo’s adorable Seinfeld impression and the hint that Reggie and Amber might just get back together after all.
-The fluorescent hat Jackie wore on the plane was lovely. Speaking of, the tag was delightful and a nice counterpart to the Reggie/Jane tag at the end of last week’s episode.
-I’m a little disappointed we didn’t get to see Rhea Perlman do a body shot. Is that bad? That’s probably bad.
-Max’s line about Uncle Ben and Dick’s line about Nicole Kidman are perfect examples of how strong this show’s child acting is.
-Blink and you missed it: the aliens high fiving after all giving the same answer when Janet asked where they’re from. They must be listening to the theme song after all.
-Good for the show for continuing to give us combinations we haven’t seen before. I don’t think there’s been a sole Marty/Abby plot thus far in the series and this was a sweet way to introduce that dynamic into the show. It’s a plot that’s been done on family sitcoms fairly frequently, but a strength of The Neighbors is that it takes something that could be overly familiar and either twists it or adds in a new element (e.g. Larry falling off the boat) to make a storyline its own. See also: the Debbie/Janet plot, which I really liked. This might have been Jami Gertz’s strongest episode overall, which is saying something considering how good she is, and anytime the show lets the humans get a little shine is A-Okay with me.
-Next week on The Neighbors: Marty is faced with having to kick Debbie off their bowling league team, while Larry’s father sends an emissary to the colony to investigate whether the aliens have become too Americanized.