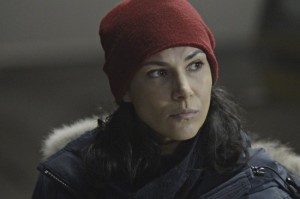 Though the base tried to prepare against the impending invasion of Ilaria mercenaries, they were unable to safely get the newly uninfected scientists into the Montana bunker before The Scythe, Ilaria’s premiere assassin, was able to corner them in the elevator and slaughter every last straggler. Alan and Hatake looked to be able to save dozens of scientists and, if their plan to defeat Ilaria worked, make it out of the Arctic with some semblance of their sanity still in tact. However, with the walls closing in on them and The Scythe becoming more of a threat, there’s going to have to be one last battle for the virus, the cure, and the base itself.

On tonight’s episode of Helix, The Scythe receives new orders from Ilaria. Rather than stealing the virus and the formula, only to wipe the base and all who inhabit it completely off the map, he is to now terminate everyone bar Hatake, who is to be brought back alive. Since Ilaria doesn’t have any vested interest in keeping Hatake alive, it seems as if they have a special kind of punishment in mind for home due to what happened to Constance and him giving them the runaround regarding the status of the virus and the inability to exact a cure. We’ve already seen that members of The 500 can indeed be killed and Ilaria certainly doesn’t seem like the forgiving type of multi-national corporation, so they want Hatake’s last thoughts and feelings to be about the type of pain he’s being put through before they end his life for good and exact revenge for Constance.

What type of trap will Alan, Julia, and Hatake set for The Scythe? Do you think that the remaining residents of the base will be able to escape unharmed? Why would Ilaria want Hatake brought back alive?