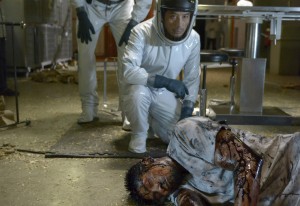 Syfy has announced that Helix has been renewed for a second season, which will begin production later this year for a winter 2015 premiere. The show is currently averaging 2.1 million total viewers, 1.1 million Adults 25-54, and 1 million Adults 18-49.

“Helix has built one of our most loyal and consistent audiences in its first season on Syfy. The incredibly talented writing and producing team have crafted a thriller that consistently delivered suspense, twists and high quality drama. We look forward to growing this passionate audience in what promises to be an even more memorable second season,” said Bill McGoldrick, EVP, Original Content, Syfy.

Helix tells the story of a CDC team called into an Arctic research facility under the guise of a suspect viral outbreak. What they find, though, is more than any of them could have imagined. The show, which is the second renewal decision the network made about its winter 2014 scripted series following the cancellation of Being Human, features Billy Campbell (The Killing), Kyra Zagorsky (Supernatural), Hiroyuki Sanada (Extant), and Jordan Hayes (House at the End of the Street).

What do you want to happen during a second season of Helix? Should Syfy keep the show on Fridays or do you think it’s strong enough for another night? Is this the creative direction that Syfy should be pursuing regarding their scripted content?