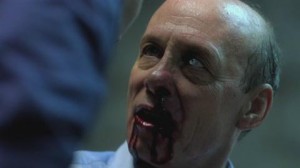 For 11 days, the CDC team has fought a mostly losing battle against the NARVIK virus. Their losing streak included the deaths of Doreen, Miksa, and nearly every other scientist working in the base, but they’ve managed to figure out a cure for the virus and have the power over The Scythe and the rest of the Ilaria Corporation. The Scythe might be dangerous and deadly, a centuries-old assassin who has perfected the methodology it takes to inflict maximum pain on someone before killing them, but he’s the one chasing what the CDC team has and if Alan and company can find a way to trap him, they might be able to escape the Arctic with their lives.

On the season finale of Helix, Julia learns from Hatake the reason he agreed to make NARVIK in the first place – his guilt over allowing the corporation to take Jaye and his desire to keep her safe. As long as Ilaria felt like they had Hatake under their thumb, they wouldn’t harm Jaye, so he strung them along for years and didn’t give them the cure since he knew how expendable he would be without that as leverage. Knowing the reasoning behind the virus might not give the CDC and the remaining Arctic Biosystems scientists a significant upper hand when it comes to their battle with The Scythe, but it’s something that will ease Julia’s mind and could bring her closer together with her father, assuming the two make it out of the upcoming conflict.

The season finale of Helix airs Friday at 10:00 on Syfy.

How do you think the first season of Helix will conclude? Will Alan be able to save the world by defeating The Scythe and fleeing the Arctic with every sample of NARVIK? Aside from Alan, who else will survive the final conflict with The Scythe?