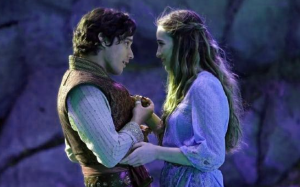 It looks like Alice’s adventures in Wonderland have come to an end, as ABC has confirmed the cancellation of Once Upon a Time in Wonderland.

The show’s April 3rd airing, which has previously been labeled the season finale, is now being billed as the series finale – the final episode of the Once spin-off – a move that is not entirely surprising.

However, there is always the slim possibility that this particular cancellation only means there will be no continuation of a Wonderland setting.  Since the show’s premiere in the fall there has been chatter among fans and critics alike that the show has the ability to become a mini-series a la American Horror Story, with different, self-contained plots each season.

Though not as successful as its predecessor, Once Upon a Time, Once Upon a Time in Wonderland has garnered attention from fans for its single main plot with interconnected characters who, unlike on Once, are not all one big family.  The show has been notably far less self-indulgent than its sister-show in its plot, and of course, simpler.