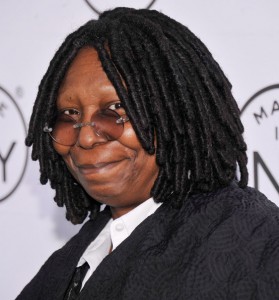 Once Upon a Time in Wonderland has added yet a new voice to its cast of characters in Whoopi Goldberg, who will be arriving in Wonderland as the voice of the White Rabbit’s wife.

According to TVLine, Whoopi Goldberg will be the voice of Mrs. Rabbit in the drama’s eighth episode, in both the current storyline and in a flashback to the infamous OCD Rabbit’s past.

John Lithgow (Third Rock from the Sun) is currently a series regular as the White Rabbit.  The rest of Wonderland‘s voice cast includes Keith David as the Cheshire Cat and rocker Iggy Pop as the Caterpillar.  Both of the latter have yet to be seen again since the pilot, but will no doubt be returning soon.

Goldberg’s previous voice work includes Disney films such as Toy Story 3 (Stretch the octopus) and most famously The Lion King (Shenzi the hyena), as well as others.

Once Upon a Time in Wonderland airs Thursdays at 8/7c PM ET on ABC.