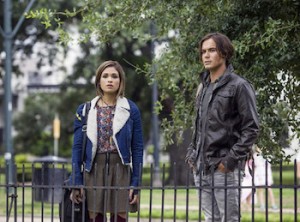 “They have a different kind of ordinary in this town.” That is the understatement of the year. Tuesday night was the much anticipated series premiere of Ravenswood, the spin-off from Pretty Little Liars. I would say the hype surrounding the show was totally valid. “The One That Got Away” has infiltrated my mind just like this show has. I’ve never been so creeped out and intrigued by a television show before. One episode in and I’m already hooked.

While Pretty Little Liars has that mystery element to the show, I loved that Ravenswood has that supernatural flare to it. I didn’t think I could enjoy a show like that but I did. I’m just so intrigued and cannot wait to learn more about this curse and what everyone in this creepy town is hiding.

We were first introduced to Miranda in the Pretty Little Liars Halloween special before the airing of the Ravenswood pilot. Miranda met Caleb on a bus going to Ravenswood, where she was going to surprise her uncle Raymond. Maybe not such a bright idea considering it didn’t look like Raymond was the type of guy who enjoys a surprise of that magnitude. Raymond runs a funeral home, so the creep factor is set in right there. Miranda wanted answers from her uncle Raymond. Why did he leave her with strangers after her parents death? Raymond seemed to be hiding something also. Carla Grunwald, who works at the funeral home gives off such a freaky vibe but kind of sweet at the same time. I don’t really watch Pretty Little Liars anymore, but I’m sure if you’ve watched PLL before, you’ve seen her character. She knew a lot more than she was letting on about Miranda’s family. I’m looking forward to the development of that storyline.

I’m not sure about any of you guys, but if I saw my face on a tombstone with my exact name, I’m pretty sure I’d be a total nutcase. The freakiest was when the tombstones disappeared. Could it have been Raymond, Miranda’s uncle that got rid of them? I really don’t know what to think. I really do enjoy the friendship between Caleb and Miranda throughout all this craziness. They have good chemistry. I don’t get a love interest vibe, but more of a brother and sister thing going on. That’s good, because Caleb is still with Hanna and I don’t want anything ruining that.

Next we met Remy. I’m really liking Remy, but her father, not so much. Simon is the editor and chief of the town newspaper and is obviously hiding something. Creepy and keeping secrets are quite a theme in this town of Ravenswood.

The last 2 main characters are Olivia and Luke. Their father was killed and their mother is the main suspect. Luke believed his mother actually killed his father, and Olivia disagrees. You thought your family had issues? Remy and Luke are a couple but there seemed to be a strain there. It was quite obvious that Remy’s father, Simon didn’t want Remy interacting with Luke. Remy’s mother was back from Afghanistan after her unit was attacked and she was the only survivor. Remy’s mother was obviously dealing with survivors guilt but she didn’t seem to have an issue with Luke. I really like Remy and Luke. I totally ship them. Lemy FTW!

I didn’t know it was possible to have such a creepy yet hot scene, but Ravenswood accomplished just that. That bathtub scene with Caleb was intense. The shower curtain tried to kill him! Seriously? Caleb told Miranda that her uncle tried to kill him, but we didn’t see anyone smothering Caleb with the shower curtain. What is going on with this house? This town? That being said, if the writers feel like giving Benjamin Price, the high school teacher played by the gorgeous Justin Bruening a bathtub scene, I would not be opposed to it.

“This wind had hands.” – Miranda

Thanks to Remy, we learned how Caleb and Miranda’s relatives died. They died on the same day in a boating accident. 5 people died in total that day. They died a week after a Ravenswood soldier had come home from the war after miraculously surviving an ambush. Sound familiar?

“Once just happens to you. Twice is a coincidence. Three times is enemy action.”

Now I really need to discuss what’s been eating away at me. Can you believe they ended the premiere that way?! On a cliffhanger?! Those writers are insane and bold, and I totally admire it.

I have so many questions. Are they all dead?  Who the hell was that girl dressed in black standing in the middle of the street?

Ravenswood definitely has that scary factor and I love it. It’s only one episode in and already loving these characters. The show is shrouded in mystery, and there’s a ton of questions to be answered. I cannot wait to continue watching this show to get some much needed answers.

What did you guys think of the episode? Are you guys hooked yet? Sound off below.