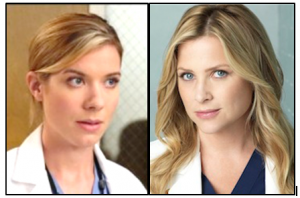 What a night that was for Arizona, knowing that her soon to be ex-wife is telling people that she is dead, followed by an unexpected drunken night in the hospital supply room with April. But something else happened in that night in Grey’s Anatomy, Arizona got a new admirer! Yes, this change of events was unknown to Arizona until in the last episode, I Bet It Stung, Leah can’t stop smiling at Arizona.

In her recent conversation with Hollywood Reporter, the actress playing Leah’s character, Tessa Ferrer told Grey fans that there might be something happening between Leah and Arizona in the coming episodes. Well, things were not getting any better between Calzona and now when Callie kicked Arizona out, Leah is there to comfort her. In the end of the last episode, Leah is seen flirting with Arizona, offering her to stay at her place as Arizona just got homeless. And when Arizona tells her that she has no recollection, whatsoever of the Gala night, Leah tells her that nothing happened between them, but she was so drunk that Leah took her back to her place and they had the most fun night, talking and making grilled cheese sandwiches and dancing!

Ferrer further tells that Leah has finally met someone who she can really talk to and as Arizona is quite a catch, she can fall in love with her very easily. Ferrer’s character is open to anything as far as she is getting attention and Arizona did say she was pretty, though we don’t know for sure if Arizona will encourage her in the coming episodes.

So, what do you think of Arizona and the intern, who is so smittened by her? Is it quits for Callie and Arizona? Is this time for a new love angle in Arizona’s life or is it just harmless flirting?