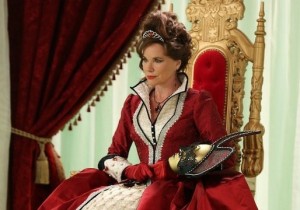 In case you haven’t been keeping up with Once Upon a Time in Wonderland, here’s one reason to give it another shot.  Barbara Hershey is set to reprise her OUAT role of Cora, Queen of Hearts in the series.

Though Cora’s life came to an end on OUAT, after attempting to ruin well, everyone’s life, fans have been hoping since the pickup of the sister show for her to make an appearance in Wonderland.  According to TV Guide, series creators Eddy Kitsis and Adam Horowitz have stated to introduce her character to Alice’s world…and now it’s official.

Currently Hershey is scheduled to appear in just one episode of Wonderland, set for March.  Aside from a meet with Alice, who else would you like to see the Queen of Hearts take on, in the delightfully evil Cora-way?  The Red Queen?  Jafar?

Knowing the Disney tale, I for one would be like to see the relationship between the Queen of Hearts and our friend the White Rabbit.

Will someone lose their head?