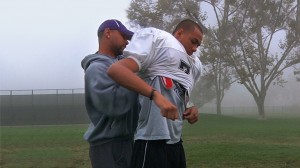 HBO has announced that upcoming sports documentary series State of Play will premiere Wednesday, December 4th at 9:00. From Peter Berg (Friday Night Lights), the series is set to explore the relationship that sports themes have with larger society. Each edition focuses on a certain hot button topic or person in the sports world and present both a 40-minute cinema verite documentary and 20-minute panel discussion, led by Berg.

“Peter Berg has a long history of producing exceptional, engaging television and we are excited about this new documentary initiative,” said Ken Hershman, president, HBO Sports. “This all-new collaboration will enable our sports division to contribute resources and ideas to a film director who has continually succeeded in raising the bar for television viewers. This unique endeavor is an ideal fit for HBO.”

The first episode of the series explores the idea of trophy kids, those children whose accomplishments are used by their parents to impress others. The type of pressure that they’re under, however, often has a negative impact on their personal development and performance both on and off the field, especially when their parents cross the line from encouraging and supportive to demanding and tyrannical. Though the parents rationalize their behavior by claiming that they simply want the child to fulfill their potential and give as much effort during each play as they can, the intensity of their investment in their child’s extracurricular activities says more about their own failed pasts than it does their child’s supposed lack of effort. Joining Berg for the panel discussion following the documentary will be former NFL quarterback Todd Marinovich and child sports psychologist Dr. Larry Lauer.

You can check out Berg explaining the goal of State of Play below, as well as a first look at State of Play: Trophy Kids.

Will you be watching State of Play? What type of issues in the sports world would you like to see it explore? Which sports figures would make good subjects for a State of Play special?