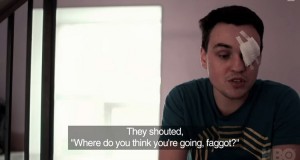 HBO will be premiering Hunted: The War Against Gays in Russia on October 6th at 9:00. Narrated by Emmy nominee Matt Bomer (The Normal Heart), the documentary takes a look at a recent anti-gay amendment to a Russian propaganda law that”s triggered a rise in the number of assaults committed against gays in Russia.

Only 1% of the LGBT population in Russia lives their lives openly for fear of losing their jobs or being targeted by vigilantes if word gets out about their sexuality. Gay rights groups don”t have the power to protest the lack of legal ramifications suffered by the attacks due to a number of ordinances preventing the mention of homosexuality in picket signs, while even straight allies have found themselves targeted by those who wish to do away with homosexuality in Russia entirely. Hunted features footage of homophobic Russians who casino have made it their mission to torment the country”s gay population, and those they suspect of being gay, with the reasoning behind the attacks being the supposed link between homosexuality and pedophilia.

You can check out a preview for Hunted: The War Against Gays in Russia below.

Will you be watching Hunted: The War Against Gays in Russia? Are you surprised that this issue isn”t getting more media coverage in the United States? Will Russia ever be a safe place for gay men and women to live openly?