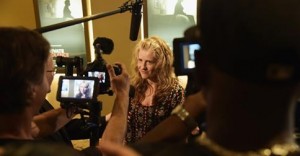 HBO will be airing documentary Private Violence on Monday, October 20th at 9:00. From director Cynthia Hill (A Chef’s Life), Private Violence emphasizes the stigma that domestic violence still carries by following the journeys of two women: Deanna Walters, who survived a brutal Halloween attack at the hands of her husband; and Kit Gruelle, a domestic violence survivor who advocates for battered women.

Presented during Domestic Violence Awareness Month, Private Violence spotlights the aftermath of Deanna’s attack, the circumstances that trap domestic violence victims in abusive relationships, and the legal roadblocks that keep victims from pressing charges against their abusers. In Deanna’s case, the attack occurred across state lines and where she didn’t have broken bones or internal injuries, the most her husband could be charged with was misdemeanor assault against a female, punishable by 150 days in jail. The documentary shows Gruelle trying to find a way to get Deanna the legal justice that she deserves, as well as working with other women in similar situations, including a woman in jail for killing the man who blinded her in one eye,

You can check out a preview of Private Violence below.