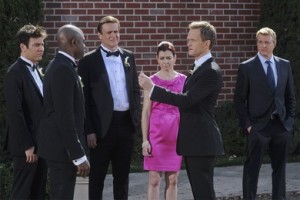 In a season of hit or miss episodes, last night’s How I Met Your Mother knocked it out of the park.  Not only did the episode give us a glimpse at Ted and the Mother’s first date, but it also gave us a peek at what happened to many of the visitors to the HIMYM universe.

First and foremost: Gary Blauman.  When Blauman (played by Cobie Smulder’s real-life hubby Taran Killiam) unexpectedly shows up at the wedding, Robin calls a code red, enlisting Marshall’s help in finding a place for him.  Cue everyone (except for the bride, including Zabka) revealing why they either hate or love the guy.  Ted once believed himself to be in a competition with Blauman for a girl’s affection, Zabka’s all for him because Blauman appreciates his poetry, James reveals that Blauman is the man with whom he had an affair, thus breaking up his marriage (as Ted is excited to learn he was the prize way back when, not the girl), and Lily loves him because he kept her from getting a horribly huge and embarrassing tattoo of Sugar Ray.  And of course, Barney can’t stand Gary Blauman because he once stole an accidental curly fry.

After the confessions, Marshall plays Judge and calls a recess to make his decision – after all, the bride asked him to figure out the seating.  However, though Marshall decided to let Blauman stay at the wedding (“Judged!”) Barney ran off during the faux recess to tell Blauman to leave or Zabka was going to kick his face in.

Once Blauman has left, the gang suddenly realizes that they may never see him again – maybe he’s really not that bad – and it’s a shame that people don’t stay in touch.  And as Future Ted says, when you find someone you want to keep around, do something about it.  Thus begins an incredible parade of previous (and surprise) guest stars with updates on their futures.

Carl is still working at the bar, with his son; Jeanette was arrested and sent to therapy with Robin’s ex Kevin, who apparently sparks up a romance with the psycho; Ranjit hit it big in stocks and owns his own limo service; Patrice has a drive-time radio show (with a caller that sounds suspiciously like Robin); Zabka becomes an award-wining poet; Zoey is still fighting the man; Scooter finally settled down…with Lily’s doppelgänger, Jasmine a.k.a. “Stripper Lily”; The Blitz bests a gambling addiction; James and Tom get back together; Sandy Rivers moves to work in Russia, still his inappropriate self; and Blah Blah…well, her name is Carol!

In the end, Gary Blauman returns.

Of course, this entire episode is a story that Ted is telling to the Mother, rather than to his kids.  Out on their first date, three days after the wedding, the two intend on dining at a Mexican-Scottish fusion resturant (complete with Mariachi Bagpipes) yet end up walking around as Ted tells her the story of Gary Blauman.  Along the way they spot the Mother’s ex – who’s proposal she just turned down the day before the wedding.  Realizing that she’s in too weird of a place, and not ready to date, Ted takes her home.

Instead of pulling an early HIMYM Ted, he actaully does let her go, feeling that it was going to work out.  He turns and leaves, but – the Mother calls him back and goes in for the kiss.  When she asks what he’s doing standing there and not following after she suggests walking around more, he answers: “Remembering this.”

I have to say, this may be my favorite episode this season.  Not only did the episode serve the HIMYM mythology incredibly well both with the recap on guest stars as well as the episode’s set-up and style, it served a larger purpose.  I’ll admit that going into this episode I wasn’t sure what to expect: I honestly completely forgot that Gary Blauman already existed in the show’s past, and I was more than a little nervous that this episode would be too much of a “filler” show than we should get in the remaining two hours of HIMYM.

But, Blauman’s relatively minor character was used pretty handily.  For one, by having the characters explain why they did or did not want him at the wedding, the show was allowed to dip back into these characters’ pasts, however ridiculous those moments were (with the exception of James’ confession on the man).  And inversely, in having a change of heart and deciding to let Blauman stay Future Ted got to give a sweet little speech on the importance of keeping such people around, and gave us that catch-up on past friends and otherwise.

While we didn’t really need this sort of flash forward, it does add a nice wrap up to characters that while seemingly irrelevant, are relevant in the big picture.  I actually found myself excited to see these returns once they actually began.

And of course, Ted’s remark on keeping people like Blauman in your life is a great little piece of foreshadowing to Ted’s commitment to the Mother.  Unfortunately, while it is great to see scenes like Ted and the Mother’s date (Radnor and Milioti have clear chemistry and are undeniably charming in their roles), it still stings a bit to realize that the entire season could have been used to showcase their future instead of just the build-up.

What did you think of last night’s How I Met Your Mother?  Are you ready for the final three episodes?  Keep in mind, a lot still has to happen before the show signs off for good.