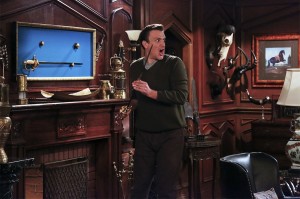 The Mosby Boys are on the case in last night’s How I Met Your Mother, “Daisy,” also known as one of the sweetest episodes ever.

While Robin was dealing with the terror her mother inspired by explaining her relationship with Robin’s father – something which bears a striking resemblance to Robin’s own with Barney – said groom was out with the boys.

Out with the boys because Zabka lets it spill that he saw Lily rushing into a quick mart and speed away in a strange car.

Remember how Lily ran off after her fight with Marshall in “Unpause”?  Tonight we found out where she went.

To the Captain’s.  (It’s the “AHOY” license plate that reveals it.)

The boys, including Zabka and Ranjeet, floor it to the Captain’s place in Farhampton, find him dating “Boats, Boats, Boats” (Robin’s ex-co-anchor: Season 6, “Canning Randy), and learn that when Lily arrived that fateful night, she spent an awful lot of night in their powder room.

Ted instantly jumps into detective mode to figure out why, and after lining up a rather supportive trail of ‘evidence’ determines that Lily had to have been smoking, as she always does when she and Marshal are apart for long periods of time.  Zabka must have seen her running into the store for a fresh pack, then off to the Captain’s for a safe place to have just one more cigarette.

He reaches into the potted plant from the bathroom – a Daisy – expecting to find ashes, but pulls out…a pregnancy test.

So, naturally the boys rush back to the hotel where all is revealed.

Lily: “Told you guys I could keep a secret.”

Flash forward in the episode tag to Italy, after Marshal convinced Lily that they were going to live her dream (she’s giving him his, cue the “aww”).  The two argue in Italian over Funyuns, Lily’s dad and Marshal’s mother walk in with now toddler-aged Marvin and an infant in a stroller – Daisy.

The episode, obviously is very Lily/Marshal heavy.  Which, really, for this amount of sweetness is not a problem.  It helped to tie up their future now that we’re really down to the final episodes, and really served to remind us that there can be couples like the two of them who will make anything work so long as they can be together.

Though seemingly less of an important storyline, Robin’s mother (Tracy Ullman) succeeded in not only terrifying her daughter about the man she’s about to marry, but then also reminded her that as long as she has someone to come home to who she can count on, the insanity is worth it.  And as Robin tells her mother – she does.

“Daisy” was really an enjoyable episode.  There was plenty of actual humorus moments mixed in with the serious and sweet.  “Kind of insane how much happened in a day and a half” – really Ted was just voicing what we’re all thinking.  And I’m not going to lie – I got a good kick out of the Captain’s musical greeting to his staff.  I thought this was a great way to transition to the actual wedding as well as add some other closure to the series besides how Ted meets the Mother.  It wasn’t overdone, stayed in-character, and let the story matter most.

At this point, I’m ready to see how everything ties up (though I’m not sure I’m ready for there to be no more HIMYM).  Only three episodes left, people!

What do you think will happen before the big finale?