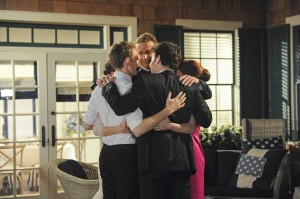 Warning: if you haven’t watched “Last Forever” turn back now.

For what was a rather extensive series finale I will attempt to be brief.

The sun finally set on How I Met Your Mother tonight, and with that, The Mother finally gets a name, we saw the famed couple meet, and we learned why Ted was telling his children this epic.  And of course, we got a glimpse into the gang’s future.

The episode traveled through time, beginning back in 2005 right as Robin would be inducted into the fray near the series’ beginning.  Lily sets a rule, as she wants to keep Robin around forever, that neither Barney or Ted may bang her unless they marry her.  Take that bit of information for what you will.

Onto the wedding reception where Ted is ready to leave even though he spots the bassist at Barney and Robins wedding.  Despite Barney’s attempt to play one last game of “Haaave you met Ted?”  Ted insists on heading out, and the five deliver what really is the emotional crux of the entire hour – the goodbyes.  But yet again, things aren’t what they seem, as Marshall and Lily fid Ted in the bar just 24 hours later, apparently having given up on Chicago because he met a girl – the girl.  The Mother.  But more on this later.

This takes us to 2015 where Ted and The Mother’s wedding planning must be put on hold because the couple learns that they’re pregnant.  Meanwhile, Barney and Robin’s marriage isn’t working out as well as we have all hoped – and the two divorce in secret.  Fast forward to 2016 where Lily and Marshall decide to move to a bigger place upon the impending arrival of their third child (plus a bonus visit from the cockamouse!), Barney is back to his old self apparently at the Halloween/farewell-apartment party, and Robin denounces the group’s attempt to stick together.  She notes that they’ve become the married couple she never sees, her ex-husband hitting on girls in front of her, and the man she probably should have married with the mother of his child.  Nothing stays the same.

In 2018 we see the full return of Barney’s womanizing-self, and Marshall’s official becoming a judge – “Judge Fudge” – and making a first ruling: that Barney is allowed to just be himself after declaring that “if it wasn’t going to happen with Robin, then it’s just not going to happen with anybody.”

2019 sees perhaps the only part of the finale that wasn’t seen coming – Barney’s quest for a perfect month (31 women in 31 days) led to a pregnancy.  Cue the arrival in 2020 that is a baby girl named Ellie, the love of Barney’s life.  “Everything I have and everything I am, is yours.  Forever,” he tells her.  Kudos to NPH in this scene.  Such a big event prompts Ted to finally marry the mother – they’ve been just going on engaged for years (a shock for Ted, I know) – and guess who shows up for the wedding?  With The Mother’s insistance: Robin.

Ultimately, the episode becomes a story of loving despite tragedy.  As we all guessed weeks ago, the reason that Ted is telling his children this story is because she’s passed away – however, that happened 6 years ago.  As the kids argue, the story really isn’t about how he met their mother, though their meeting scene is especially charming and successful in compression the years-worth of clues we’ve gotten about who The Mother is: Tracey McConnell, by the way.

In the end the kids urge Ted to ask out Aunt Robin becuase he’s clearly still in love with her.  And while this may seem a giant slap in the face to us fans, it is surprisingly fitting of the hope the show reaches to inspire.  Penny and Luke are completely fine with their dad going for it with Robin, and so Ted shows up one more time outside Robin’s apartment, blue french horn in hand.

But the kids are right.  The entire series as a whole is not about how Ted met the mother.  It’s about this group of five friends and their lives.  Sure, the quest for true love may be the hook and title card, but it’s not the entire hinge of the story.

True, it would have been nice to not have such a rushed ending after a series that was set during one weekend.  But there are always things we’d wish were different in a series finale, and there will never be a “perfect” ending.  To read my personal thoughts on “Last Forever” click here.

Sure, in such a compressed style the finale is far from what it could be.  But given that Lyndsy Fonseca and David Henri filmed their final scene years ago, clearly Craig Thomas and Carter Bays had a vision and they were sticking to it.  In the grand scheme of How I Met Your Mother mythology, the finale was true-to-form.  As I continuously find myself thinking now hours out of watching the finale, a series isn’t only about the ending – it’s about the journey.  And HIMYM has had a pretty great one.

What did you think of “Last Forever”?