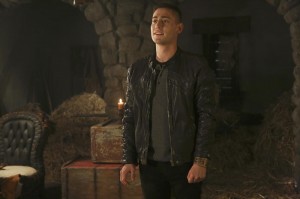 Good news for the Knave of Hearts – should Once Upon a Time be renewed, actor Michael Socha is expected to join as a series regular next season.

While not a done deal because Once has yet to be officially renewed – though there is little doubt that it will be – the fantasy drama will be bringing its spin-off’s most favored face into the fray.  Despite ABC confirming that they will not be continuing the Once spin-off in a second season, Socha has charmed viewers of Once Upon a Time in Wonderland this season as Will Scarlet/Knave of Hearts, the sarcastic, romanic, thief who helped Alice (Sophie Lowe) fight against Jafar.

Of course, it is unclear how exactly Socha will join Once, or whether or not any of his other Wonderland cast members will be following him, though it is nothing to completely discount.  Surely Will Scarlet can add something new to what will be Once Upon a Time‘s fourth season.

Can you imagine him facing off in a sass-contest with the Regia/Evil Queen?  Or better, Leroy/Grumpy?

What do you think?  Are you excited to see The Knave in Storybrooke?

(Apparently he already has a place there, if you watched last week’s Wonderland.)