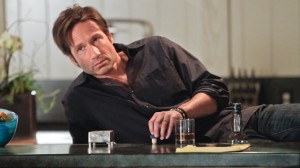 NBC has given a straight-to-series order to Aquarius, a 13-episode drama starring David Duchovny as a Los Angeles police sergeant on the trail of Charles Manson. The series will be written by John McNamara (In Plain Sight) and is said to cover the Tate-LaBianca murders in subsequent seasons.

“Event series are a big priority for us, and the combination of a show that charts the lead-up to the Manson murders, along with a television star of the magnitude of David Duchovny, is the very definition of an event,” said Jennifer Salke, President, NBC Entertainment. “We’re thrilled to be working with these talented producers, including Marty Adelstein and creator John McNamara, to present something truly original.”

Produced by ITV Studios, Aquarius joins a recent string of straight-to-series orders by NBC, which include The Michael J. Fox Show, Dracula, and Hannibal, with the latter in two financially advantageous production arrangements for the network. It could premiere as early as this fall, depending on the progress of casting and script production, meaning that Dracula would likely not come back and that the network would still be pursuing the idea of a genre bloc with Grimm as the centerpiece. There’s always the possibility that Aquarius, with its name actor and recognizable subject matter, could fill in on a night other than Friday or act as a replacement for a failing fall drama, but given the production arrangement and the uncertainty around Dracula, it seems as if the show has already been penciled in on Fridays.

There’s no word yet on when production on Aquarius will begin or when the show could possibly premiere on NBC. Thus far, Duchovny is the only actor signed on to the project.

Will you be watching Aquarius? Do you like that NBC is doing more straight-to-series orders with known properties starring name actors? Can this show possibly measure up to the critical acclaim of fellow straight-to-series project Hannibal?