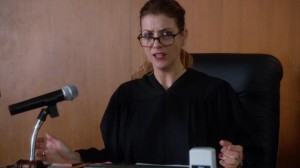 Deadline is reporting that Betsy Thomas (Whitney) has been tapped as the new showrunner for upcoming NBC comedy Bad Judge. Previous showrunner Liz Brixius (Nurse Jackie) exited the project earlier this month following the completion of only a handful of episodes.

Created by Chad Kultgen (The Incredible Burt Wonderstone), Bad Judge follows Rebecca Wright (Kate Walsh), a judge serving on the Los Angeles Circuit Court. While she’s not in the courtroom dispensing justice, Wright leads a wild lifestyle of partying and recklessness – that is, until she encounters a little boy whose parents she put behind bars. In addition to Walsh, the series stars Ryan Hansen (Party Down), John Ducey (Jonas), Tone Bell (Whitney), and Miguel Sandoval (Medium).

In addition to her work on the former NBC comedy, Thomas has produced the likes of My Boys and Guys with Kids.

Bad Judge is slated to premiere Thursday, October 2nd at 9:00 on NBC. You can check out the trailer for the series below.