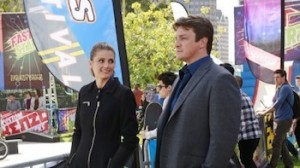 It feels like forever since I’ve reviewed an episode of Castle and tonight’s episode was a perfect one to get right back into the groove. The case of the week was pretty good, but I was totally drawn into the B plot with Espo and Ryan. Those two chuckle heads were hilarious! Every time they would try and be friendly towards Castle in the hopes Castle would choose one of them as his best man I busted a gut laughing. They were so transparent but it was so hilarious to watch.

Of course, I totally knew Castle wasn’t going to pick either of them but it was still pretty funny to watch them vying to be his best man. I really loved when Ryan and Espo went to Lanie so she could decide between the two of them. Lanie shot them down because it’s not her decision to make. Seriously guys? What did they think?

In the end, Ryan and Espo confronted Castle and told him he doesn’t have to choose. They’ll both be his best man. Castle told them he was flattered and honored but he already decided on a best man. Castle asked Alexis to be his best man. I just thought that was totally adorable and such a Castle thing to do. Good news though, Castle wanted Ryan and Espo as his groomsmen. I can’t wait to see the shenanigans they get into at Castle’s bachelor party. If they don’t show it, I really hope they at least mention the craziness that went down.

Other awesome wedding news we learned this episode was that Kate asked Lanie to be her maid of honor. I am so extremely happy about this, you have no idea! I really wish we would have seen Kate officially ask her but that’s alright. You gotta love Lanie’s enthusiasm, “The dress is the right mix of elegant and saucy.” I can’t wait to see this dress and I cannot wait to see this wedding!

“Law & Boarder” also showcased Castle’s crazy competitive side which was brought out when him and Beckett were playing Scrabble. She beat him once and of course Castle being Castle couldn’t let that happen again, so he wanted a rematch. Beckett ended up beating him again! I could not stop laughing. Castle was being all confident he was going to win and Beckett busted out the word, Quixotic for the win. I’m not even going to pretend like I know what that word meant before last night.

The last scene won the entire episode for me. Castle wanted another rematch but Beckett had another idea. Strip poker! Oh my little Caskett heart pretty much exploded. I’m just going to quote the entire scene for you and you can imagine it in your heads. Oh, by the way, Kate was in a bra the entire scene. These two will never, ever be a boring married couple.

“Me too, but all I have left to bet with is this shirt” – Castle

“This is so much better than scrabble” – Castle

Funny lines and other bits:

Kate’s gorgeous ponytail. (Why don’t my ponytails every look like that?)

“A reigning champion unable to cope with defeat… that sounds familiar.” – Beckett

“I admit I am extreme… Extremely handsome.” – Castle

“I think catching killers is pretty extreme… and then there’s marrying you.” – Beckett

“That’s a notion created to comfort those who lose.” – Castle

Thank you Jim Adler! Welcome to Team Castle! After just one episode, I already love you. Coffee, apples, ice cubes, always, rain, swings, handshakes, and now scrabble will never be the same again and I’m perfectly okay with that. My huge smile turned into a huge gasp after they showed the promo for next week’s episode, “Veritas.” Hold on to your seats my fellow Castle lovers, it’s going to be a crazy ride!