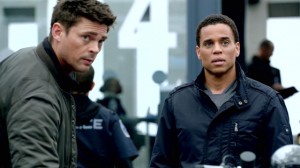 Deadline is reporting that FOX has cancelled freshman sci-fi drama Almost Human after one season. The show, which worked its way into the renewal conversation over the course of its 13 episodes, was said to be a victim of strong drama development and being produced by an outside studio.

FOX has made a majority of its decisions on its 2013-2014 schedule, with the fate of comedies Surviving Jack and Dads still to be decided. While the former’s situation is cloudy, the latter’s renewal chances have apparently improved recently, putting its chance at renewal much higher than they were when it had its episode order cut and finished its season on a down note. In addition to already ordered Backstrom, Hieroglyph, and Gotham, FOX has two dramas currently in development: Red Band Society, about a group of teenagers living in a hospital, and Empire, a sprawling look at the world of hip hop music.

Almost Human starred Karl Urban (The Lord of the Rings: The Return of the King) as John Kennex, a detective who loses his leg and becomes outfitted with a synthetic limb. Once he awakens after a 17-month coma, he realizes that he has to work with Dorian (Michael Ealy), a robot, and slowly, the two find that they have more common ground than they initially thought. In addition to Ealy and Urban, the series starred Minka Kelly, Lili Taylor, Michael Irby, and Mackenzie Crook.

Do you think FOX made the right decision in cancelling Almost Human? Should the network have brought the show back, even if it was as a midseason replacement? How do you expect the FOX fall schedule to look?