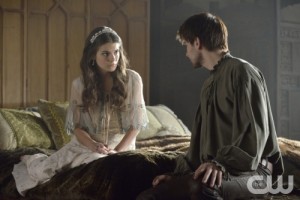 Mary thought that her relationship with Francis would protect both her heart and her country, as she sured up Scotland’s alliance with France with the union and found someone she could see herself loving for the rest of her life. However, as much as she might love Francis, the pull of their respective countries has proven to be too much and as a result, there’s been tension between them. It’s hard enough dealing with the hormonal imbalances of teenagedom – it’s darn near impossible to do this while trying to run a country and make a marriage work. But Mary can’t afford to sit idly by while Francis seizes his destiny as Dauphin in battle; she has to do what she has to do to keep Scotland safe, whether he likes it or not.

On tonight’s episode of Reign, Mary hires a mercenary to help her family in Scotland, since Marie is still under siege from the Protestant rebels. During her time in France, she’s realized that she’s capable of going further and doing more in the name of her country and in this instance, she could be risking her relationship with Francis if he learns she did this without his consent. However, Mary has already make peace with that, as she doesn’t want her time in France to be a net-negative for Scotland; if Francis, Henry, and Catherine aren’t going to protect her country, she’s going to have to do it herself.

Elsewhere on Reign, Lola grows more suspicious that Lord Julien will betray her, while Francis embraces his role as Dauphin during a bloody battle between France and England.

Will Mary come to regret hiring the mercenary? Would Lord Julien betray Lola and bust up the arrangement that’s proven to be beneficial for them both? Could Francis opt to stay away from the castle even longer since he likes his first taste of military power?