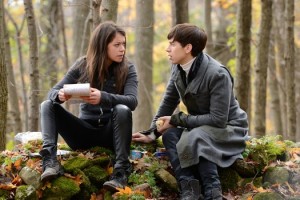 Once Sarah found out about the grand conspiracy she was involved in and the existence of a group of clones that she was a part of, she had to leave behind her old life, minus her relationship with Kira. Granted, Sarah didn’t have much in the way of roots considering how transient she’s been, but any and all connections to the past had to be severed in the name of protecting those she once loved and keeping herself as off-the-grind as possible. However, now that she and Fe have hit the road with Kira, she’s going to have to reach back out to former connections in her life if she wants to ensure enough distance is between her family and the Dyad institute.

On tonight’s episode of Orphan Black, Sarah turns to Cal, an old flame currently working as a woodsman, for help in concealing herself from those who seek to do her harm. However, there’s nowhere she can run that the Dyad Institute cannot locate and shake down, no one person with the type of resources necessary to shield Sarah and her family from the reality of her life. Whether Sarah likes it or not, she cannot simply run away from who she is and the bounty that remains on her head, so rather than disappearing into the ether with her brother and daughter, she’s brought the weight of her existence down on someone she once loved, putting him in as much danger as she’s been under since that fateful day at the train station.

Elsewhere on Orphan Black, Cosima discovers more about her illness, while Alison, still distraught about her role in Aynsley’s death, must perform in the musical.

How do you think Sarah’s old flame will be able to help her, Felix, and Kira? What will Cosima discover about the illness that afflicted Katja and is currently negatively impacting her own health? Is Alison going to be able to perform to the best of her abilities, considering her grief and the amount of alcohol she’s been drinking?