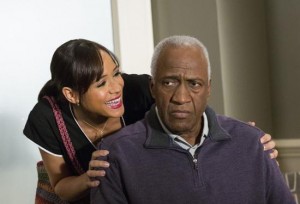 Rosie took the job with the Miller family as a way to get herself back on her feet following her three-month detour in the detention center. Ever the hard worker and always willing to put others above herself, Rosie genuinely likes the profession she’s in and needs to have the comfort and stability that comes with a daily routine. If she’s going to get over Spence and move on with her life, she can’t have time to wallow, nor can she afford to sit around and obsess over the details of her personal life. Being helping to help a family through their issues along the way will simply be a bonus, but do the issues afflicting the Millers run deeper than she realizes?

On the next episode of Devious Maids, Rosie takes Kenneth to a specialist and learns that there might be hope for him yet, that his condition isn’t necessarily permanent. While this should be good news for Lucinda and Didi, with the former being able to live her own life again and the latter getting the man she loves back to the way she knows him, things might not be that cut and dry, particularly when it comes to Didi. Although she claims to love Kenneth, Didi did say that her husband has left everything to her in his will, meaning that she would be well-taken care of long after he’s gone and that she’d be able to emerge victorious over bitter enemy Lucinda once and for all. Lucinda, meanwhile, would get her life back whether Kenneth lives and gets better or passes away due to his condition and, assuming she thinks she’d be the sole beneficiary, she would take a lot of joy in informing “gold digger” Didi that she gets no pay out from the marriage. Could either Lucinda or Didi selfishly impede in the progress Kenneth makes toward recovery? Or do you think that, while they both have their issues, neither of them is touched enough to do something so dark?

Elsewhere on Devious Maids, Carmen prepares for her performance debut, while Genevieve invites Zoila to a luncheon, Evelyn finds comfort in Tony, and Marisol discovers shocking news about Nicholas and Opal.

How would Lucinda and Didi react to the possibility of Kenneth coming out of his condition and returning to his normal self? Is Carmen going to be able to make it through her first performance after what happened to Alejandro? What type of shocking news will Marisol find about Nicholas and Opal?