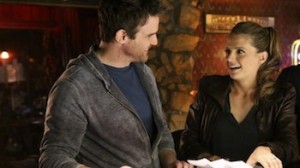 Just when you thought we were going to get a happy ending, those hopes were dashed and they literally burst into flames. As soon as I saw that black svu in Castle’s rear view mirror, I started screaming “No, No!” and I didn’t stop till well after the episode ended. I just can’t believe that’s how the season 6 finale ended. Major cliffhanger! I have to give props to Terri Miller & Andrew W. Marlowe though. It was a great episode. I was nervous about the finale, but as the episode progressed I really thought we were going to get our Caskett wedding. Boy was I wrong! You have no idea how happy I am that we are getting a season 7. Not that there was any doubt but still.

So let me dry my tears a bit because I want to start at the beginning, because as much as I want to discuss that crazy ending, there were lots of great stuff during “For Better or Worse.”

First of all, Beckett was already married! Apparently she is not a one and done kinda girl. In her defense, Beckett didn’t even realize she was married. Kate and her then college boyfriend, Rogan O’Leary went through the drive thru of love in Las Vegas as a joke (drunk) and got married.

Beckett then went to find Rogan so she could get him to sign the papers to end their marriage and found out he’s quite a piece of work and not in a good way. First Rogan made Beckett break into the truck belonging to his ex-girlfriend, then Beckett saw Rogan being abducted. Rogan was such a schemer that not even the local police wanted to go look for him.

I thought the whole husband storyline was pretty funny, and I laughed so hard when it turned out Rogan knew the entire time that him and Beckett were married. He had told his girlfriend that his wife was in a coma! Such a schemer! Rogan was using the whole wife in a coma thing as an excuse not to fully commit to Tildy.

I won’t get into great detail about the whole blackmailing a pastor thing since I want to discuss the Caskett wedding but Rogan had photos of the pastor with a stripper. Helping people was the pastor’s calling. I’m sure it was. It was bad enough Rogan had photos of the pastor, but he also had photos of Mickey Barbosa. Barbosa the mob hit man who disappeared a decade before. It was quite the brilliant play that Castle and Beckett brought in the biker gang that Rogan owed money to, to claim the reward for Mickey.

Rogan finally signed the papers and Castle and Beckett could get married! All happy right? Well, not so fast. During Beckett’s little trip to end her marriage, they lost their wedding venue. Ever so smart Alexis suggested they could move the whole party to their Hampton’s house. I thought that was such a fantastic idea. Why didn’t they think of that as their venue in the first place? Ryan’s tux was too small, even though Alexis checked the measurements a ton of times. So many jokes there.

The next disaster (many people didn’t think so) was that Kate’s wedding dress got ruined! Lanie got to deliver the bad news to Kate that a pipe burst in the apartment above Kate’s and the dress Matilda King gave to Beckett in Dressed to Kill S6 Ep14 was destroyed.

A sign of things to come? Regardless, it was such a sweet, honest moment between Castle and Beckett. He always has the right words to calm her down. The bad seemed to be going away and it looked like we were going to get our happy ending after all. Beckett was wearing her mother’s wedding dress, and looked so beautiful. It was like it was made for her. Even though she couldn’t be there, it was like a piece of her was there to support her daughter. Another moment that made me tear up was between Kate and Martha. Martha thanked Beckett for making Castle so happy.

Martha gave Kate the most beautiful pair of blue earrings. They were given to Martha by her mother to wear on her wedding day and given to her mother before that. “Only women of substance have wore these gems. They’ve been waiting Katherine for you.” My friend pointed out that Martha obviously didn’t think Richard’s previous wives were worthy and I’d definitely agree with that statement. Katherine is an extraordinary woman. It’s not to say Gina and Meredith aren’t special but none of them are Beckett. It was such a beautiful moment between the two of them. I’ve always loved the relationship between Martha and Kate. There’s a mutual respect there.

And now for that ending. I got scary flashbacks from Downton Abbey and I didn’t like it one bit. From the moment I saw that black svu I knew something bad was going to happen and Kate getting a phone call after Castle was an hour late wasn’t a good sign. What a devastating ending. I had such a bad feeling going into this episode, but the way the things were going I thought, “Hey! Maybe they would get married.” I should have known better. The tears started up when Kate got the phone call, and when she ran out of the car to see Castle’s car up in flames they just continued well after the credits.

I can’t even begin to process the ending. I’m sure I’ll have more thoughts in the days to come.  I was pretty sad at the season 2 finale of Castle, when Castle went off with Gina but this is on a whole other level. It was just so devastating seeing Beckett so happy and minutes later her whole world was torn apart. Stana played the scene perfectly. She didn’t even need to say a word. She said it all in her expressions. All the joy in the world and in one instant everything can change. Seeing her crying will be an image that will haunt me the entire summer.

How are we going to survive this hiatus? I have so many muffled thoughts running through my mind. I don’t believe Castle is in the car. How could he? The show is called Castle! He can’t be dead. Could it be that Jerry Tyson kidnapped him? Do you think somehow Bracken is behind this? Or is this a whole new mythology Marlowe spoke about in that interview. What are your theories? We have many months to speculate. This will be the longest hiatus ever! In Marlowe We Trust…

Soundbites and other things from “For Better or Worse”

According to Gates, she ran into a wall and got a black eye before her wedding day.

“You were gonna have naked ladies at your party too?” – Castle

“Listen to man parts. Let’s get the hell out of here” – Rogan

Adorable Lanie and Esposito moment before the wedding.