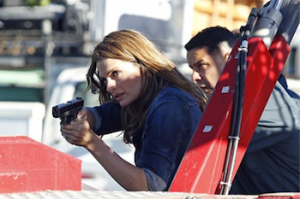 I survived the Castle summer hiatus! But I barely survived the season 7 premiere. Season 7 opened up exactly where we left off last season and the team didn’t waste any time trying to track down Castle. The opening sequence was so intense, heck, the entire episode was intense! I’ve had the entire night to sleep on it and my heart is still racing like I’ve been running in a marathon. I don’t think I took a breath for the entire opening sequence. I think this was one of the most intense episode of Castle ever and I loved it! I say that a lot, I know, get used to it.

“Driven” was a fast paced episode shrouded with mystery and bad ass Kate emerged once again, reminding all of us that Kate will do whatever’s necessary to get answers especially when it involves someone she loves. She almost broke a guy’s finger!
All the awards to Stana. I got serious chills when she delivered one of her many amazing lines. “After that there’s nine more.”

Not only did Stana get me with that line, she got me at the beginning of the episode when Kate ran towards Castle’s car which was engulfed in flames. I was in tears seeing Kate so hopeless in that moment. It was so painful to watch.

I’m pretty sure I wasn’t the only one who’s head was spinning the entire episode. The episode is over and I still don’t know what to believe. All I know is that we’re headed towards some new mythology and I couldn’t be more excited. Don’t get me wrong, I loved Kate and her journey of solving her mothers murder but it was time for a new chapter in this tale. I have no idea where the writers are going with this but I trust this Castle team fully!

I’m the worst at transitioning so let’s talk about what the hell happened to Castle?
I seriously have no idea. I think I was in the same boat as Kate. At first I thought there was no way Castle planned his disappearance. Why would he do that to Kate, Alexis, and Martha? But as the episode progressed and the insurmountable evidence was emerging I thought maybe Castle did it to get away from some people? Then I thought I was being ridiculous. I’ll admit it did look pretty bad when video footage emerged showing Castle dropping off all that cash. Oh! About that cash. How awesome was it that Cardano made an appearance? We haven’t seen him since S5EP4 Murder He Wrote. I love when Castle brings back old characters.

Anyways, I was so happy when Kate realized how ridiculous she sounded while talking to Alexis and Martha. I didn’t blame her though with her misgivings. I was feeling the same way. I just couldn’t believe Castle was gone for 2 months. I nearly freaked out when I saw the newspaper clipping of “2 months, no answers.” Of course they had to have a shot of Castle’s empty chair at the precinct. It had me in tears! Then I was laughing when Kate told Castle she almost shot the night janitor because he almost moved Castle’s chair. This is what this show does to me. One minute I’m crying, one minute I’m laughing and the rest of the time I’m holding my breath.

I cannot wait to see where the Castle team takes us next. Who the heck is the guy who was impersonating Henry Jenkins? What did he have to do with Castle’s disappearance? So many questions and the season just started! I’m so excited! Is it next Monday yet?