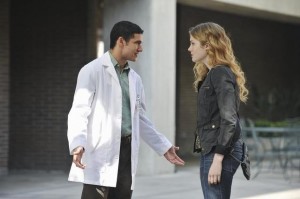 TVLine is reporting that Alberto De Diego (Major Crimes) is slated to recur on the second half of The Fosters‘ second season. He’ll be playing Rafael, the program director at a foster drop-in facility where Callie goes for help.

It’s as yet unclear why Callie seeks the help of the drop-in facility. The most likely scenario is that it has to do with her delayed adoption and the complicated emotions she’s experiencing from her relationship with Brandon; being an unbiased third party, Rafael could give her the type of advice and perspective she needs to hear regarding Brandon and point her in the direction that she needs to go if she wants the adoption to be feasible in the future. Even though she has a right to be absolutely crushed by the stunt the Quinns pulled on her, Callie can’t afford to go into self-destruct mode and she might need someone without any ties to the situation to pull her back from the abyss before she goes over for good.

In addition to his role on the TNT procedural, De Diego has appeared on the likes of The Nine Lives of Chloe King, Awkward Universe, and Stone Jones vs. The Recession.

The second half of The Fosters‘ second season will premiere January 2015. A concrete premiere date should be released later this fall.

Why do you think Callie is paying a visit to a foster drop-in facility? Will her adoption come through sometime during 2B or will she still be on the outside looking in on the Foster Adams family? Is Rafael going to give her the type of support and advice necessary that she needs to keep going?