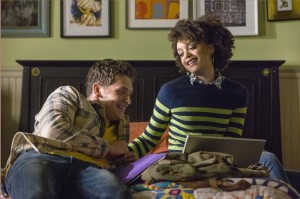 It’s not just Miranda that’s been feeling lonely due to being a victim of the Ravenswood curse; each member of the Cursed Five has had to deal with the isolation they’ve been put under, a separation from normalcy and the life they want to live that has proven to be emotionally trying. As such, they’ve all made some curious decisions about how to spend their time and what type of company they choose to keep, with Olivia keeping the faith in Dillon so as to have someone in her life to keep her ground and get her mind off of all things supernatural. However, Dillon isn’t exactly an innocent party in all this and now Olivia knows it, too, thanks to Springer’s confession in the hospital to being under her boyfriend’s control.

On tonight’s episode of Ravenswood, Olivia has to decide whether or not to believe Springer; he could easily be lying and trying to cast doubt on someone close to Olivia as part of his revenge for the fate of his father, but Olivia finds enough validity in what he said to approach Dillon, who hasn’t been around through the latest round of curse consequences. She can’t afford to assume the best about anybody while her life and the lives of her friends are in danger, but most worryingly, she brings up her concerns about Dillon while the two are alone, meaning that if he decides to go after her or do something to hurt her, she won’t have anybody there to protect her. As tough as Olivia may be to continue pushing forward despite the curse lingering over her head, she’s placing herself in a lot of danger by not having a backup plan, danger that could lead her into a situation she might not be able to get herself out of.

Elsewhere on Ravenswood, Mr. Price sends Caleb and Miranda to investigate a secret Collins had been keeping, while Luke’s eagerness to prove Dillon isn’t who he says he is puts him in danger and Caleb starts school.

Ravenswood airs tonight at 9:00 on ABC Family. You can check out a review of the most recent episode here.

Will Olivia figure out that Dillon is hiding something? What could Mr. Price be so concerned about that he sends Caleb and Miranda to investigate? How much danger will Luke find himself in as a result of his eagerness to “out” Dillon?